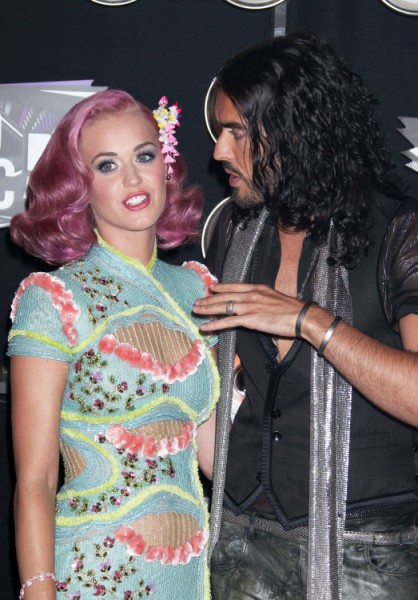 Poor Russell Brand can’t escape the Katy Perry questions but at least he’s not freaking out and lashing back at reporters anymore. Right, Graham Norton? If anything, Brand is finally getting more articulate about his break up with the singer and his latest explanation of the demise of the 14-month relationship is as entertaining and esoteric as ever. Russell told Australia’s 60 Minutes:

“Sometimes it goes well, sometimes it don’t, but if you sort of sense there’s an incompatibility, then in any relationship regardless of the status of the individual, it kind of is best to go separate ways. I think if you’re someone who’s really into mountain biking, it would be good to go out with someone else who’s into mountain biking, and if you’re really into Eastern mysticism, go out with someone else who into Eastern mysticism. I think if you’re a devoted tennis professional and you get married to a crystal meth addict, you might have trouble… I’ve been in a lot of trouble.”

So… who’s the crystal meth addict here? Is Russell throwing Katy under the bus or himself? Ex-addict Russell Brand loves being candid about his druggy past life but this just sounds like he’s using examples to make a point. Clearly opposites don’t attract for Russell anymore. Or maybe opposites can attract but they can’t sustain a relationship. That’s for damn sure. Katy’s attached to John Mayer right now so Russell probably found out she was a dumb ass way too late. That’s why you shouldn’t rush marriage! It’s too easy to hide the crazy that first year of dating. After that, it starts leaking out and true colors have the nasty habit of showing up. Oh well, at least there weren’t any kids involved, right? It just sounds like Russell was ready to sit around the fire reading Tolstoy and Katy wanted to live up her 20s a little more. It’s no one’s fault, but for Russell’s sake, I hope people stop asking him about it soon. For our sake I hope people don’t stop asking him because you know he has no filter and the more removed he gets from that relationship the better the stories will become!

But still, do you think it’s appropriate Russell might have called Katy Perry a crystal meth addict? Should something as nasty as that even be joked about? I have a feeling she might not be too happy about it but I also have a feeling he could probably care less.