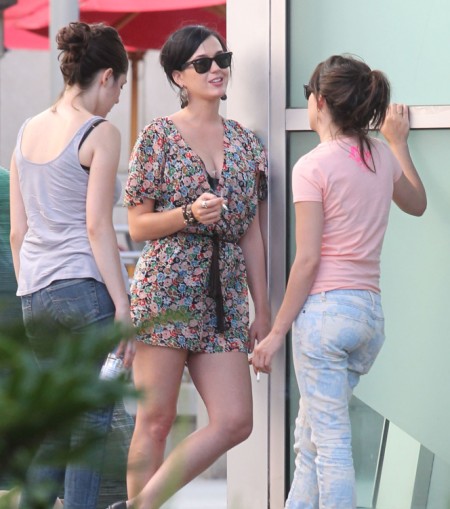 Is this wishful thinking on my part for Katy Perry? John Mayer sex by night, friends, respect and dignity by day? Hells yes it is. I’m all for getting over an ex husband by hooking up with a notorious douche bag as long as Katy realizes she should keep him in the dark – literally, we’re all straight. And I think that’s exactly what’s happening.

So in the new Katy Perry, John Mayer dating saga we know a few things to be true. The New York Daily News reports the two were seen leaving a  house party together Saturday night. This comes at the heels of the two going out for dinner last week at the Chateau Marmont and photo agencies got pics of him dropping her off at her apartment early the next day. I couldn’t score the pics but they’re out there. And then they were spotted “canoodling” last month at the Soho House. No pics of that though as far as I know.

But Katy hasn’t just been busy with John. She’s been seen out and about at the movies with friends and with her ass hanging out at the water park. God I love water parks. I’m so jealous! Anyway, why hasn’t John accompanied her on these joyous daytime jaunts? He’s pasty to be sure. But is John her shame f-ck? I just giggled when I wrote that because my inner Catholic girl just pursed her lips in disappointment over my vulgarity. But that’s what this is. It’s sex. Pure and simple, don’t you think? Why else would Katy keep John at bay? Or is John keeping Katy at bay? I’m thinking Katy’s in charge. I bet John would love to go public with someone as high profile as Katy. He’s been too quiet lately, and as much as he tries, discretion just isn’t in his nature, just ask Jennifer Aniston and Jessica Simpson). Is this reminding anyone else of the Pretty Woman quote: “Oh, I’m not trying to land him, I’m just using him for sex.” Classic. I can watch it every time!

But my Katy is making me nervous. She’s spending more time with Mayer and I’m worried she’s getting attached despite what her people feed to People magazine. “I don’t think either of them are trying for anything serious right now,” the source told People. “She’s not talking like he’s ‘The One’ … She’s comfortable around guys who understand the craziness of that world, which he definitely does.”

Fine. Fine. Let’s just keep it that way. He just seems to fit her type. Like my future lover, Russell Brand (no worries, my husband already knows my intentions), Mayer has a colorful history with the ladies as well as a bad boy image. I think Russell actually earned his though whereas Mayer just likes to talk. The man who penned “Your Body is a Wonderland” has a way with words after all. Girls fall for that sh-t. I’m just hoping Katy learned her lesson with Russell. Though I can’t blame her, she rushed into that relationship too fast and couldn’t balance it with her rock and roll lifestyle (although I bet Russell would have appreciated the water parks when they were together). There’s no need to rush into another one. Be young. Have fun. Have protected sex. Let John Mayer take your pants off you, just don’t let him charm the pants off you!

Do you think Katy is just using John for a little fun on the side or are you feeling she’s into this relationship more than she’s letting on?