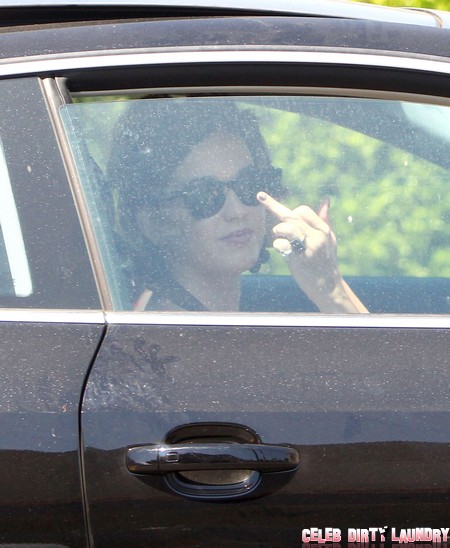 It seems that Katy Perry thinks that all her money should equate to the power to control everyone and everything.  John Mayor’s latest conquest is gunning for her ex-husband, Russell Brand.  It seems that Russell just talks too much about her and their marriage for Katy’s sensitive tastes.

The Daily Mail reports that the Daily Star has a source that says Katy has called her dogs out to scare Russell into shutting up – she wants her lawyers to gag her ex.  Can she do that, and if so, on what grounds?  Russell isn’t bound by a draconian prenup or contract, like Kim Kardashian’s estranged husband, the NBA dunce, Kris Humphries, is he?  Russell certainly isn’t slandering Katy – almost everything I’ve read that he has said about Katy has been fairly benign or even complimentary.

In any case, here is what the Daily Star’s source has to say: “Katy is fed up with Russell constantly making reference to their marriage in interviews. While it’s mainly harmless and often even complimentary, she’s sick to death of his comments being splashed all over the news and magazines.  Katy went berserk after the interview with Howard Stern.

She called lawyers and told them to put a gagging order on Russ to prevent him from speaking to her in public again.

Katy vowed never to reveal the ins and outs of their marriage break down or speak about Russell in any way. All she wants is the same in return.”

Apparently it was Russell’s recent interview with Howard Stern that pushed her over the edge:  He told Stern: “I was really, really in love with her, but it was difficult to see each other… We were together when it was right to be together, and when it wasn’t we worked it out … It was a lovely relationship … it mostly didn’t work for practical reasons … We did work it out, she’s happy, I’m happy.’

‘I don’t want anything to hurt her. She’s younger than me, she’s a young woman and she’s beautiful and she’s sensitive and I care about her deeply … I don’t want to be too glib.”

If this story is true and Katy is actually trying to gag Russell then she is a fool.  She is a fool anyway, going out with arch sleazebag John Mayer, but that is for another post.  There is no way Russell will ever be shut up by some shyster lawyers.  I would bet that Russell would prefer jail to silence if it came to that.  What do you think?  Is Katy all of a sudden so sensitive?  I recall that she was throwing herself at everyone from Cheryl Cole to Tim Tebow.  Now that she has found Mayer, the douce, she thinks that she is happy… What a fool.

Singer Katy Perry spotted out at the movies with some friends at the Arclight Cinemas in Hollywood, California on August 11, 2012. After leaving the movies Katy signed some autographs before getting in the car and giving the photographers the bird