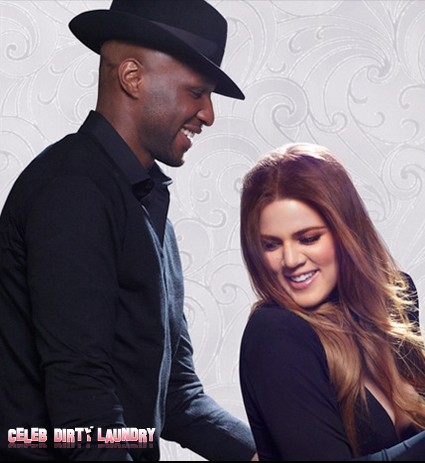 Tonight the second season of  Khloe & Lamar premieres on E! and it is a 2-night Premiere.  The show is the third spin-off of the show Keeping Up with the Kardashians.  The show features reality star Khloe Kardashian and her husband, basketball star Lamar Odom.  On this season’s show the couple are moving to Dallas and a new city brings new drama but Khloe still stands by her man.

Even though the two got married just one month after meeting Khloe and Lamar have the most solid Kardashian marriage of the gang.  This season of Khloe and Lamar promises to delve a little into the sports world as we witness Lamar struggling with the NBA lockout.

Perhaps because they live in the shadow of her mediawhore sister Kim Kardashian the two look come off relatively normal and down-to-earth.  Even Kris Humphries said he found Khloe the most genuine and straightforward of the Kardashian Klan despite the fact that she hated him.

On tonight’s show Khloe becomes sleep deprived – Lamar’s sleepless nights are starting to take a toll on Khloe’s beauty rest. Watch her struggle to convince him to go back to bed.

We will be live blogging the show with all the up-to-the-minute details at 10PM EST so make sure to come back to this spot and watch the show with us.  Refresh often to get the most up-to-date results!  In the meantime check out the sneak peek video of tonight’s episode below!

RECAP: It’s morning and Lamar is determined to be a vampire in bed with klhoe. He tells her to “take him to the Casbah” (from Pepe Le Pew). Khloe loves her relationship with Lamar, he makes her feel so special and she is always into making it feel spicy, never wanting the honeymoon stage.

The movers arrive, Rob is moving out of their house. Lamar is a little upset, he loved having Rob around – he’s the little brother he never had.

Khloe goes over to Rob’s new place and he’s upset that Lamar hasn’t been over to see him yet or even checked out one of his episodes on Dancing with the Stars. Rob is super nervous to be dancing on stage, but feels good that his family is in the audience. He finds it very hurtful though that Lamar has never showed up.

At home, Klhoe installs a sex swing to surprise Lamar. Lamar is with his best friend, Jamie, they are heading for a workout and Lamar is excited because he thinks it would be the best thing for Rob. He tries to call him and gets his voicemail.

It’s night time, Klhoe and Lamar are trying out the swing, when it gives and they crash on the bed. Khloe is embarrassed, but they make the best of it.

The next day, Rob bails out of lunch with Khloe and Lamar. Lamar confesses to Khloe that his feelings are hurt, he is really missing Rob but he doesn’t want to chase him down. Khloe feels bad that Lamar feels that way.

Malika and Khloe are transforming Rob’s old bedroom into a “love den”.  That night, Lamar is hope and Khloe takes him into the bedroom with all the sex toys, but he’s a little beat because it’s been a long week and turns her down; she feels rejected.

Khloe is working out with Rob, she is playing both sides and telling Rob and Lamar that both want to work out with each other. Rob is leaving and Lamar arrives, Rob tells him off and says he’s not one of his home boys and calls Lamar rude. Lamar calls Rob a punk and Rob calls him a dumb bitch.

Khloe confronts Lamar and tells him that the situation between him and Rob is causing her to be emotionally drained. Khloe figures out the problem, Lamar is hurt that Rob has moved out. She tells him that Rob is looking for brotherly love from him.

Lamar goes over to visit Rob, they start talking and Rob tells him that he feels that he only wants to hang out with him on his schedule. Lamar feels bad about how Rob feels and they get re-bonded.

Khloe is confused, Lamar never turns her down for sex. She tries again to lure him into the “cazbah”, but he stalls so they start talking about it. Khloe feels that maybe she went a little too far with all the sex toys.  The two start fooling around, the spark is back!

That’s it for tonight’s episode, don’t forget to come back tomorrow night for another all new episode.