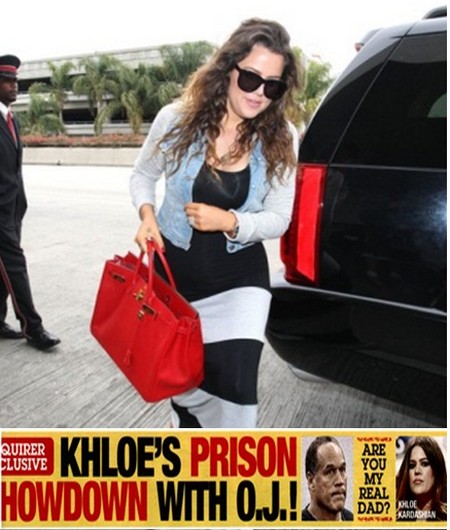 Khloe Kardashian knows that she barely resembles her sisters, Kim Kardashian and Kourtney Kardashian, and so she wonders who her real father could be. Her mother, Kris Jenner, has admitted to numerous affairs while married to the late lawyer, Robert Kardashian, the father of Kim and Kourtney – so Khloe naturally wonders which of the men Kris slept with is her biological father.  It’s a sad state of affairs indeed, and now Khloe’s search for her father has taken her to Nevada’s Lovelock Correctional Center where murderer O.J. Simpson is incarcerated!

It seems that while Kris’ late husband Robert Kardashian thought he was best buds with Simpson the former NFL great was sleeping with his wife.  Kris admitted on Jay Leno that she fooled around on Robert and so Simpson’s claim that he slept with his lawyer’s wife her seems to fit.  According to sources, Orenthal James says he got Kris pregnant with Khloe.  Wow!

The National Enquirer Print Edition, July 2 explains: Khloe Kardashian has been secretly speaking with 0.J. Simpson in prison, begging him to answer a question that has tormented her: ”are you my real dad?”

The ‘Khloe & Lamar’ star is so emotionally obsessed by the persistent rumors she is OJ’s daughter that she recently began phoning the imprisoned football player-and is trying to get him to agree to a jailhouse face to face. Robert Kardashian was a key member of O’Jays dream team of lawyers that got him off the hook for the 1994 murders of his ex-wife Nicole and Ron Goldman. And up until his death in 2003, he firmly believed he was NOT the biological father of Khloe who looks like neither of her two famous sisters, Kim and Kourtney.

Jan Ashley – Robert’s wife after Khris Jenner – revealed earlier this year he had expressed doubts that Khloe was his child.  “Khloe decided she can’t wait any longer, so she decided to reach out to OJ and confront him with the pressing question:  ‘are you my real dad?’” revealed an insider.  “OJ has told friends that he is Khloe’s dad and he’s never denied it when his pals have asked.”

“Khloe is telling friends she wants looking to OJ’s eyes when she asks him if he is her real father. Even if he denies it or just laughs it off she believes she’ll be able to know the truth. Khloe has spoken to OJ over the phone, expressed her feelings and asked that he meet with her.  He got up the courage to talk to her because he knew it was important to Khloe, but he was noncommittal. He told her he would think about it and call her back – that was several weeks ago, and Khloe still hasn’t heard back from him,” says the insider.

We have news for O.J. – there are other fellows in the running for the position of Khloe’s biological dad – just look at what we presented on CDL here about Alex Rodan!  Only Kris knows the truth – or does she?  After all with multiple sex partners it can be difficult to attribute parentage.  Of course a simple answer would be to have some DNA tests, Jerry Springer style – we’ll probably see that done on some future Kardashian reality TV episode.