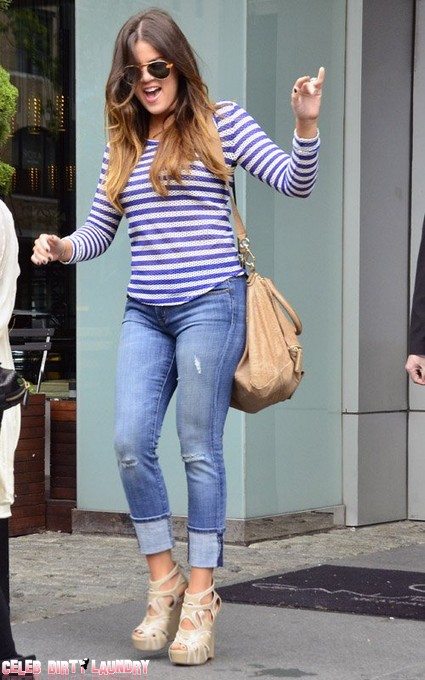 Now we know the real reason Khloe Kardashian pulled the pin on Khloe & Lamar. She’s getting her own TV show! Yep  – she’s going SOLO. She’s ditched her husband Lamar Odom and is going it alone in the big bad world of reality TV.

According to TMZ…Khloe is a wanted woman. E! don’t want one of their Kardashian kash kows getting away so they’re working on a starring vehicle for Khloe. That’s right – she’s getting her very own spin off. She won’t have to share precious screen time with her basketballer hubby and his ailing career. It will be Khloe, Khloe, Khloe. That’s the way the Kardashians like it – front row and center!

Celeb Dirty Laundry covered the demise of Khloe and her husband’s series yesterday Khloe & Lamar End Reality TV Show  We understood turning the cameras off on this celebrity couple was all about giving Lamar’s struggling career a sporting chance. That they were putting his basketball dreams ahead of fly on the wall fame. Maybe that was Lamar’s idea – but Khloe wasn’t going to be relegated to guest appearances on her family’s other shows.

So what will Khloe do now she’s solo? Sources connected to E! are apparently looking at a show similar to Kourtney and Khloe Take Miami. There’s no word if one of her sisters will join her. According to E! insiders Khloe is a ‘huge draw‘ and ‘We’re definitely in the Khloe Kardashian business.‘ So it’s nice to know her 15 minutes of fame isn’t up…..yet.