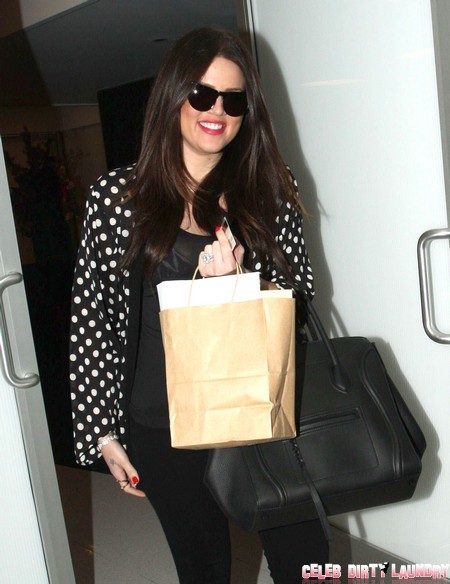 Khloe Kardashian is scoring several brownie points for her X-Factor co-hosting gig, but unfortunately the Kardashian Trashian is not scoring with Lamar Odom anymore. According to the latest National Enquirer article, Lamar feels “fouled” (We’ll let the dodgy puns slide this time). Lamar is allegedly furious that his wife is going back on her word to dedicate this year to starting a little family and rather focusing on becoming a reality television superstar.

A reliable and anonymous source said, “Khloe told Lamar that this was going to be his time – she even agreed to put the third season of their reality show on hold so he could concentrate on getting his confidence back on the bas­ketball court. Khloe promised that his career would be the priority. She also agreed that they would spend more time together in an attempt to have a baby.”  In April of this year, Lamar was listed as “inactive” with the Dallas Mavericks, but luckily for him (and his sanity) he was traded to the L.A. Clippers shortly thereafter. This move signaled a change in his career and future, but it doesn’t seem that Lamar has the same sentiment towards Khloe’s breakthrough and career changing gig on The X-Factor.

The couple has also been attempting to conceive for the past three years, including using IVF and other “alternative” methods. Could they have given up on trying to manufacture a little pink -foot Kardashian? Could this be the reason why Khloe is staying as busy as possible? According to the source, “Now she is going to be totally consumed with The X-Factor, and he’ll be spending a lot of time on the road with the Clippers. So they’ll see less of each other than ever.”

The not-so-loving couple celebrated their third wedding anniversary on the 27th of September, but friends of the couple say that the tension might splinter them apart before the fourth anniversary. Khloe was the one who spoke to the media earlier this year and said that women should “put their husband first” and that “part of being married is knowing when your husband needs your support.” Why the hypocritical change of heart all of a sudden? Did something happen that we’re not aware of?

According to television critics, Khloe’s move to The X-Factor will cement her popularity, fame and financial status in the industry. “It will bring her huge exposure, a large paycheck and make her an even bigger name.” Khloe needs to ask herself, where is the fine line between ambition and crazy obsession? We’ll whip out our paint brush and outline it for her: if your relationships crumble due to wanting more money, more fame and/or a bigger career, you know you have a problem. The source added, “Lamar is really hurt and angry. He can’t help feeling be­trayed by Khloe’s decision to spend more time on her career than on his. It’s like she’s choosing money over love.” Stop being so dramatic! It could have been worse – she could have been kidnapped by money hungry Scientologists.

Let us know in the comments below if you think Khloe deserves this shot at worldwide recognition. Should she rather focus on her family and husband?