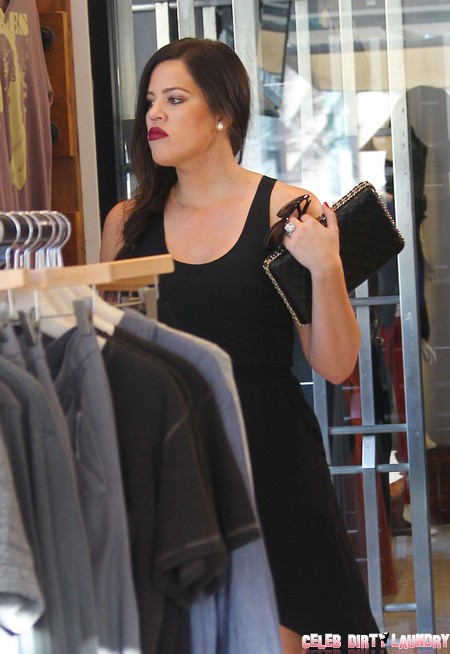 As is tradition, the Kardashian women have supposedly run off another husband who couldn’t handle the smoky eye makeup, various berry nail polishes, or reality television lifestyle. It would seem that Khloe Kardashian and Lamar Odom’s whirlwind romance is headed towards its tragic end. The couple married on September 27, 2009 after dating only 30 days.

The Kardashian women have always been open with their love of family. Sister Kourtney Kardashian has had her second child with Scott Disick and with Kim’s relationship with Kanye West flourishing, Khloe’s fertility issues are a continued strain on the couple.

A source reports to Star Magazine that a recent heated argument pushed the couple to the tipping point with Odom exclaiming “You can’t give me kids. I’m out!” Following the fight Odom left for Las Vegas to clear his head. Khloe followed suit by escaping to Miami to begin filming Kourtney & Kim take Miami, a spin-off of E!’s popular program Keeping up With the Kardashians.

The couple has been trying to conceive for some time. Odom, who has three children with ex- girlfriend Liza Morales, has been vocal about wanting to expand his family from the beginning of the marriage, and, as evident on Keeping up with the Kardashian and its spin offs, Khloe is more than willing to carry his very wealthy and athletic seed. Odom’s patience has run out though. A source reports to Star Magazine that “the only thing Lamar has been sticking around for was a child. But since Khloe hasn’t been able to get pregnant, he doesn’t see any point in staying in the marriage. He’s done.”

Odom has allegedly been secretly meeting a star divorce attorney to begin the end of his marriage to Khloe, but sources report that Khloe wants to make her marriage work. Both Odom and Kardashian invested in each other when they married 2 years ago, and if they part they each would lose, time, love, and full access to the 67 million dollar chunk of change between them. Maybe these two crazy kids can work it out. If heavy reality television editing has taught us anything it’s that those two are a very happy couple.