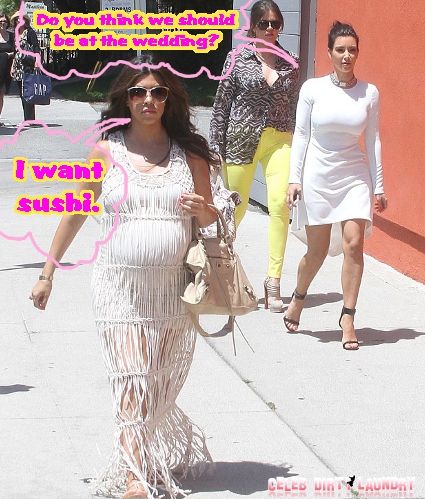 No-one marries like a Jenner/Kardashian, as is seen over the weekend when half brother Brandon Jenner said “I do” to his new wife, Leah Felder, the daughter of rock royalty Don Felder, who is the guitarist from the Eagles. Kendall and Kylie Jenner were glammed up in flowing Hawaiian (where the wedding took place) dresses, with a flower over one ear, wearing their bridesmaids titles with pride and coolness, keeping up with the Kardashians.

Is this true? Did the sisters skip the big day because they’re just not that into the Jenner step brothers? Or is something else boiling in the Kardashian pot?

All three sisters tweeted and blogged about the wedding, stating their excitement for the married couple. Kim tweeted, “Congratulations to my step brother and his gorgeous new wife!” and the blog updates were as non antagonistic as an amoeba. So, is this another case of entertainment media being lost in translation? Or is there really something hiding behind the “snub”?

Sources close to the couple claim that there is absolutely no form of any anger or resentment towards the newly married couple, but that the “Kardashian sisters had other engagements” – the irony of engagement(s) is slightly hysterical.

Several entertainment blogs stated that they never really had any form of relationship with the Jenner boys and this is merely a blip on their radar. The Kardashians are known for their antics and semi-obsessed royalism, so the truth might never be revealed. One thing is for certain, the married couple looked DASHing when they swigged back POG (Hawaiian drink) juice at their hotel in Kauai.