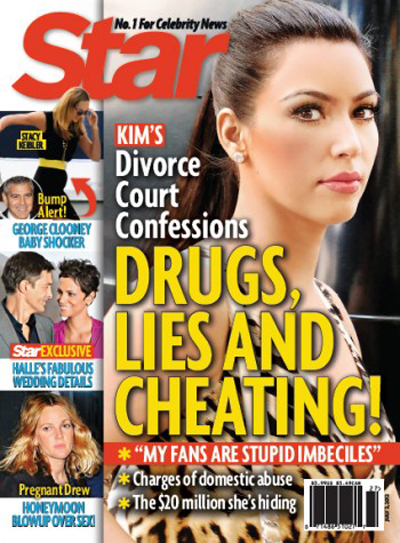 Is Kim Kardashian smart enough to know a word like “imbeciles”? Because that’s what the latest issue of Star Magazine is claiming that she called her fans!

According to the tabloid, Kim’s ex-husband Kris Humphries is planning on leaking voicemails that Kim left him during their short, 72-day marriage, in which she calls her fan base ‘gullible,’ ‘stupid imbeciles,’ ‘boring little nobodies’ and ‘pathetic people with no lives of their own.’

And, if that wasn’t bad enough, Kris may also leverage Kim’s obsession with plastic surgery, the supposed $20 million that she’s hiding from him, as well as charges of domestic abuse to try to take her down in court!

If all of these allegations are true, it certainly would make sense why Kim’s been so desperate to keep the divorce proceedings out of the news. Not even her recent, sympathetic interview with Oprah might be able to save her reputation, if her fans ever hear exactly how much she despises them. Related: Kim Kardashian On Oprah Winfrey: The Big Sob Story Unfolds

To find out more about Kim’s divorce secrets– pick up the current issue of Star Magazine for all the details!