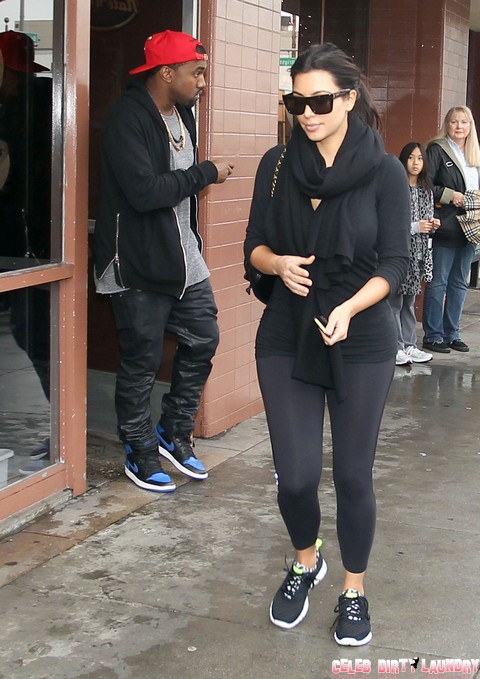 It looks like even with a baby on board Kim Kardashian still isn’t completely happy. It seems like no matter what she does, there is always something missing in her life. Either she’s married to a putz and miserable or she’s chasing potential men away by the dozen. Kim has spent the last 8 months glued to Kanye West’s side and even he realized in order to keep her around he had to upgrade her look and fast.  Kanye has taken Kim from looking like an upscale hooker that is fake from weave to red back shoe and molded her into his “perfect bitch”.  She has gained a bunch of weight recently and is rumored to now be pregnant with Kanye’s kid, something that should put her over the moon right?

I mean her sisters seem to have fared a whole lot better than her lately. Kourtney Kardashian still puts up with that douche lord, Scott Disick, but she loves her two babies and Khloe’s career has taken off thanks to her hosting gig on The X Factor.  A baby would probably make Kim feel like, at least for a little while, she’ll be the center of attention again, so it’s all good.

Except that it’s not, because Kim and Kanye are having some serious issues.  The kind that are tricky to keep hidden even in the 1 minute run from a restaurant to the car as we saw when the couple left a restaurant the other day. A picture speaks volumes and Kanye looked near tears as Kim had her head down looked like a whipped bitch- I mean dog.

Kanye is rumored to be totally over dealing with Kim’s diva behavior (there is only room for one diva in his relationships and that’s his spot to fill) and Kris Jenner’s constant meddling. It looks like Kim is about to learn yet another valuable lesson- getting pregnant doesn’t fix anything. Signing on to be a baby mama leaves you a single mama in the long run.

Is Kanye about to hit the bricks and leave Kim to have to hire a team of nannies all by herself? Tell us your thoughts in the comments below!