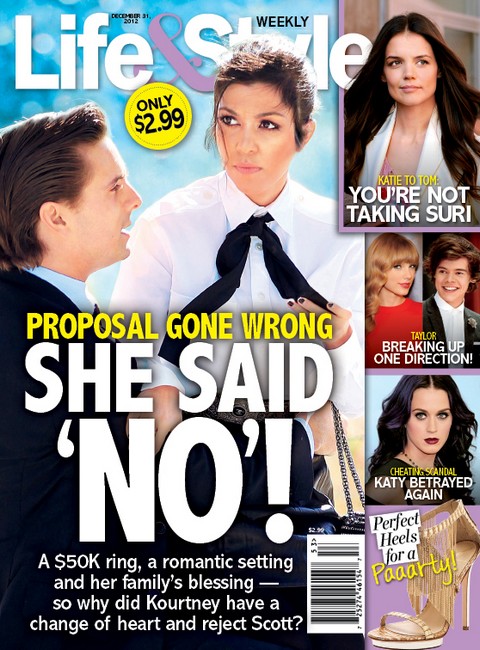 Kourtney Kardashian and Scott Disick to be married soon?  Not so much.  According to the latest Life & Style magazine Scott proposed with a $50,000 ring, her family’s blessing, and the most romantic setting he could put together, but Kourtney ain’t biting.  Miss Independent said No!  I don’t know how much longer you think he’s going to wait or how many more times he’s going to ask, but you saying “no” is getting old real quick.

Katie Holmes and Tom Cruise are apparently fighting like cats and dogs.  So what is the source of contention?  Well, it is one Miss Suri Cruise.  According to sources Katie is not happy with Tom and is no longer willing to go along with their previous visitation agreement.  What changed her attitude?  Is he away too much?  Is Scientology coming between them again?

Is Taylor Swift the next Yoko Ono?  Sources are claiming she could be the reason for the demise of teen sensation, One Direction.  Too much artistic input?  Is too much time with Harry Styles taking him away from practice?  The rest of the band is none to happy with the “Red” singer and are ready to get the group back on track.  I hear another grammy-nominated number one hit from Miss Swift in the works.

Katy Perry is adding another failed relationship to her list.  Katy and beau John Mayer are in the middle of the latest cheating scandal.  Come on Katy…he hasn’t been faithful to any of his past girlfriends.  Did you think he was going to change?  Rest assured, Miss Perry will be more selective with her next man.

Also, what are the perfect t heels for  this holiday season?  Metallic gold perhaps?

Get the details on these stories and more in this week’s issue of Life & Style magazine.