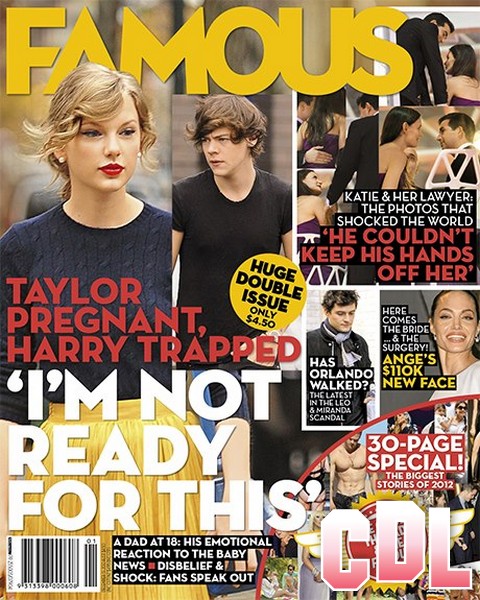 Good girl Taylor Swift ain’t so good, and everyone’s going to know it when the premarital baby bump starts to show. We have no problem with the circumstance, but Taylor is so obsessed with the innocent act, when really—the girl will be wearing harlot red to her wedding! Famous Magazine reports in their cover story “Taylor Pregnant, Harry Trapped, ‘I’m Not Ready For This: A Dad at 18, His Emotional Reaction To The Baby News” that Harry Styles, hairiest member of hit band One Direction and cougar Taylor’s latest prey has indeed knocked up the country singer.

Now, nothing is confirmed but we expect Harry will open his big gob and say something about it soon. That’s what we love about Taylor dating one of the 1D boys: they are super honest and frank about sex! Harry even told about his first time (with his best friend’s mother, no less!) to OK! Magazine, and it was a cover story! The guys are really supportive of condoms and STD prevention, and we know that if (when) Harry and Taylor split, Harry will be telling us all the raunchy details!

For those of you who still want to believe Taylor is a virginal girl from Tennessee, check out our report on the very obvious walk of shame Harry did after a sexy night with Taylor in her NYC hotel room. He didn’t even have someone in his entourage bring him a change of clothes or get his own suite in the same building—it was straight up: the same clothes, tousled hair, and a morning after departure around brunch time. Do you think Taylor would be stupid enough to get pregnant on accident, or is this her “obsessed with having a fairy tale family” gene coming out? Did she get pregnant on purpose to trap Harry into marrying her? Is she really pregnant? Let us know what you think!