Miley Cyrus Bashes Taylor Swift – Did She Call Her A Slut? 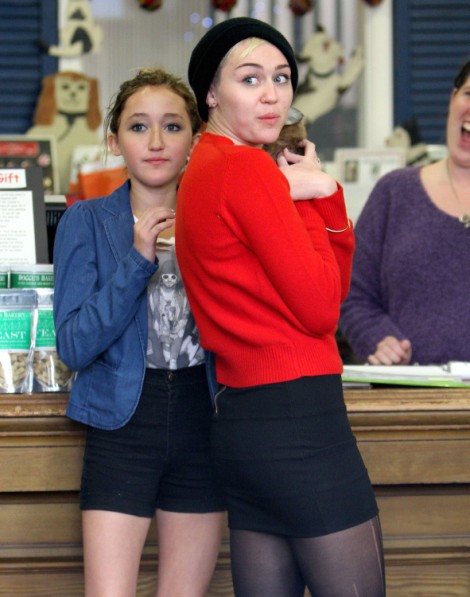 Before we get to the bottom of whether Miley Cyrus did throw Taylor Swift under the bus and call her a slut, let’s answer the question. Is Taylor Swift a slut? She likes her boyfriends that’s for sure but she is 23 and perfectly allowed to date as many guys as she wants. However, for a girl that professes love for all things innocent like double rainbows and kittens, she does like her sleepovers and it’s not like she’s trying to hide it. I’m just saying… let’s say Miley did call her a slut… I’d probably laugh and might just agree.

Oh but our little Miley Cyrus/Taylor Swift twitter feud isn’t to be! It all started when E! News correspondent Ken Baker drew comparisons between the two women on twitter. He brought up the fact that Miley has been called loose and fast for years even though she’s been dating fiance, Liam Hemsworth, for three years whereas Taylor is everyone’s Virgin Queen but has hooked up with 13 dudes in the same time frame. Are those numbers, right? Damn girl!

Well, as usual, Miley was quick to join any twitter discussion having to do with herself. She responded, “people are idiots and call me a SLUT when I am engaged at 20 cuz I am madly in love with ONE man. Just happy someone admitted it,” but added her response did not mean that Taylor was a ho bag. “haha there is no tweet heat! Don’t go trying to make this look like I started any kinda drama. I laughed because I know.”

This reminds me of the Sex and the City episode where the ladies ask if they’re sluts because they actually tally how many guys they’ve had sex with. The numbers are high but make sense. If you date for twenty years and you only sleep with like two or three a year then the numbers are going to climb! That doesn’t make you a slut! I can get into the whole double standard of male and female pop stars and how it’s totally accepted and encouraged for dudes like Justin Bieber to bang every pathetic groupie that walks whereas the girls have to stay respectable but I won’t. That’s a boring and old argument. But I will, surprisingly, say this about Taylor Swift. You know I’m not always a fan of her PR moves and puppy snuggles but at least she’s not afraid to put it all out there. Thirteen guys in three years seems like a lot for the purity princess but she’s not stopping. It works because she’s smart. It’s all in the name of love. You have to date a lot of frogs before you get to that prince right? That’s why she’s not being labeled Christina Aguilera dirty. Very good Taylor. Very good.

Did Miley Cyrus bash Taylor Swift or did she just come to her own defense? Do you think Taylor remains such a goody two shoes because of her almighty quest for everlasting love?