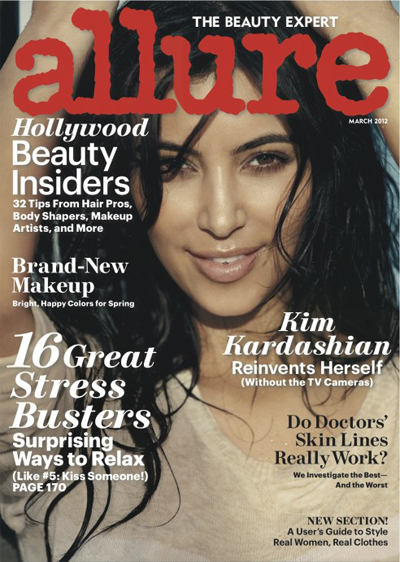 It’s been less than a year since Kim Kardashian walked down the aisle with her now-estranged husband Kris Humphries, but even though her divorce is far from being final, the 30-year-old reality star is already thinking about her next wedding!

While there’s presumably no groom in mind (although some people are taking bets on Reggie Bush), Kim recently told Allure Magazine that there won’t be any cameras when she walks down the aisle again, for the third time:

“When I saw Khloe and Lamar get married — and they had their wedding on TV — I thought, ‘Oh, my gosh, that’s so exciting! That’s what I want!’” she said of her sister Khloe Kardashian‘s televised wedding.

“If you were to ask me now, that’s not what I want,” she added. “I would just want it to be so special, with our family and close friends, and that’s it. Somewhere on a deserted island, very private. No cameras.”

Somehow, we find it hard to believe that Kim, who’s filmed every part of her life from a sex tape to doctor visits, would somehow let her wedding go un-photographed, especially considering how much money there is to be made from selling photos and footage from such celebrity events. Still, you have to give her credit for trying to sound like she’s turning over a new leaf, when really many people speculated that her marriage to Kris was a sham from the beginning.

Kim also revealed that the media circus surrounding her marriage and the dissolution of it has made her a more guarded person:

“Will I be more private of a person? Am I more guarded? Absolutely,” she explained. “(It) definitely made me want to be more private with my relationship, whenever I choose to get into one again. I’m not ready, but when that time comes, I’ll be more cautious about who I let my world open up to.”

We wouldn’t be surprised if Kim ends up with several more marriages under her belt, just like her heroine Elizabeth Taylor. However, she should probably think about running any potential grooms by her sister Khloe first, especially since Khloe tried to warn Kim that her marriage to Kris was a bad idea.