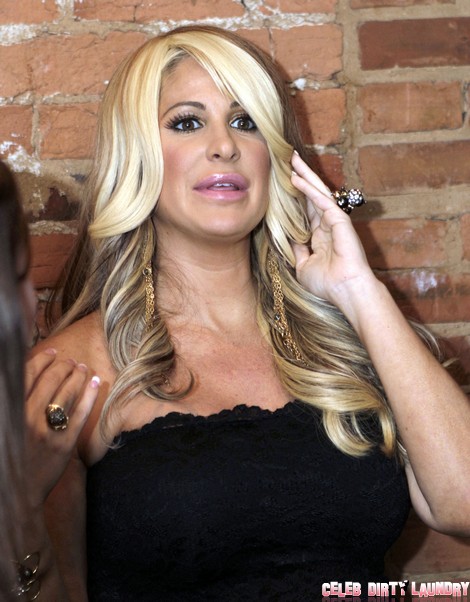 I think the very least of Kim Zolciak’s problems is the fact that she has walked away from The Real Housewives of Atlanta– the Bravo show that made her famous in the first place. Yesterday CDL told you about Kim’s legal trouble and painted the picture of a woman that has lived far beyond her means for a decade. It looks like her tax evasion finally caught up with her and now she could potentially owe the IRS 7 million bucks! Jail time for the high-maintenance diva is also a realistic possibility.

The hits just keep coming for Kim because now we have learned that her ex-husband, Daniel Dominic Toce, a convicted child molester is set to be released from jail on Valentine’s Day 2013. Daniel is also the father of Kim’s oldest daughter who is around the same age as Daniel’s abuse victim. Supposedly when he was first jailed Kim attempted to terminate his parental rights but either the court proceedings didn’t go her way or else she was distracted by her shiny new relationship with now husband, Kroy Biermann and failed to follow through.

Daniel will have to register as a sex offender for the rest of his life and will spend ten years on probation, but even with all of that in place, he could feasibly still have contact with his daughter. I’m sure this situation has only added to the drama and stress of Kim’s current life. She has to feel like the walls are closing in on her. That Bravo show was how Kim made her money, people are crawling out of the woodwork saying that Kim still owes them sizable amounts of money and the IRS is nipping at her heels. Now her ex will be out in a few short months. Is life catching up with Kim? Is this her way of having to pay for years of a dishonest lifestyle? Tell us your thoughts in the comments below!