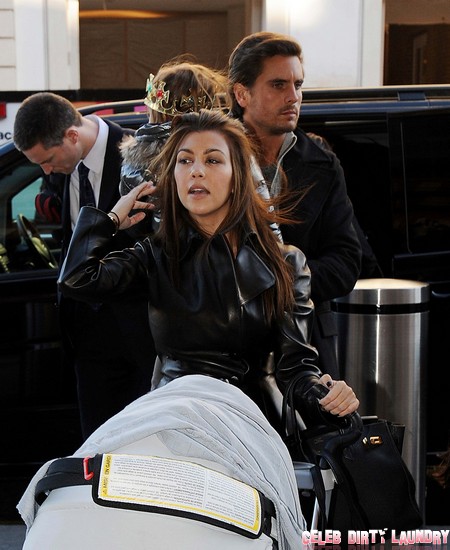 Why the sudden money grabbing, Kourtney? Why the sudden urge to cut off your future husband from all things Kardashian? Well, according to In Touch magazine, as reported by Jezebel, Kourtney is fed up with Scott’s wasteful spending. A friend of the couple revealed to the magazine, “There’s no way she’d walk down the aisle with him without a prenup. She needed to protect her and her children’s futures.” Scott allegedly exploded like an overweight child at a salad bar when Kourtney broke the prenuptial news to him during their recent vacation to Paris and London.

Be it as it may, Kourtney has logic reasoning behind her forceful decision, because Scott’s been a bit of a naughty boy with the finances. On the 4th of November, the bad boy of reality television partied with Wilmer Valderrama at Miami’s LIV nightclub, where the terrible two spent $20 000 on alcoholic drinks and party favours. According to a source, “They were both drinking and acting wild until 7 a.m.” A few days earlier, Scott was at NYC’s 1Oak nightclub and threw “fistfuls of cash into the air to make it rain.” Oh Lawdy Louise, how we wish we attended that party…

However, Scott isn’t taking it lying down. He has been wooing Kourtney and romantically soft soaping her into dropping the prenup, but the wicked witch from the west isn’t giving up that easily. An insider added, “Kourtney needs to look out for Mason and Penelope. If anyone screws up in this marriage, it will be Scott. She’s no dummy.”

A certain Kanye West song popped into our heads when we heard of Scott’s money hunting ways. We’ll give you a low-down and twist up the lyrics a bit:

He take my money when I’m in need/Yeah, he’s a trifling friend indeed/Oh he’s a gold digger way over town/That digs on me/Now I ain’t sayin’ he’s a gold digger/but he ain’t messin with no – Well, you got the gist of it.

Scott Disick, Mason and Kortney Kardashian leaving the Dorchester Hotel and arriving at Kings Cross St Pancras Station in London, England on November 11th, 2012. If I had to look at Kourtney’s bitchy face every day I’d want to get paid BIG TIME!