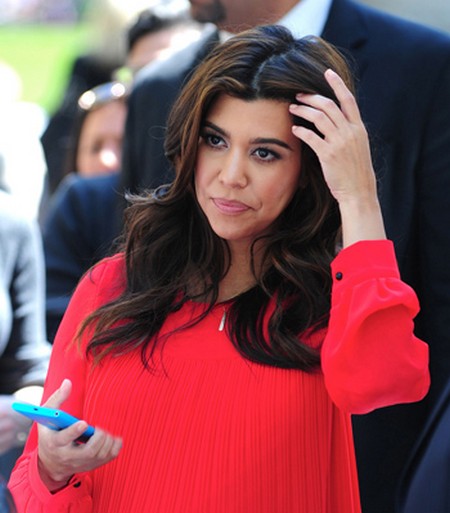 Kourtney Kardashian and young son Mason were returning from Mexico and stuck in an endless line at LAX.  Out of nowhere the reality star bolted to the very front of the line, infuriating those who had been ahead of her.  Now this is exactly what you would expect from an entitled pushy Kardashian, right?  Well hold on a second – apparently there was a legitimate explanation for this ostensibly obnoxious behavior and it involves mental illness…

According to Reality Weekly Magazine, this was not another Kardashian moment where they fully expect to receive preferential treatment.

“I had a small panic attack in customs when they stopped everyone in a tunnel,” Kourtney said. “Looking behind me, all I could see was people and in front of me, tons of people. I had to just run to the front of the line because I literally couldn’t breathe. I’m hoping that it goes away after my pregnancy.”

“She has struggled with panic attacks since her late teens,” says an insider.

Kardashian however, claims these attacks are brought on by her pregnancy.  Did she know that her entire life was going to be filmed?  Is this why she is always freaking – or is the hormones?

“It’s a horrible feeling and I’m hoping it goes away after my pregnancy.  I hate that feeling of being trapped with no control Ahhhh deep breath!”

Being part of the Kardashian clan alone seems like it could cause panic attacks.  Between the typical family infighting, Momanager Kris Jenner, and Scott Disick for a boyfriend it’s no wonder she can’t breathe! In fact, as we reported here at CDL Kourtney just laid down 5 rules for Scott to follow or else! Read more on Kourtney’s condition in the latest Reality Weekly.