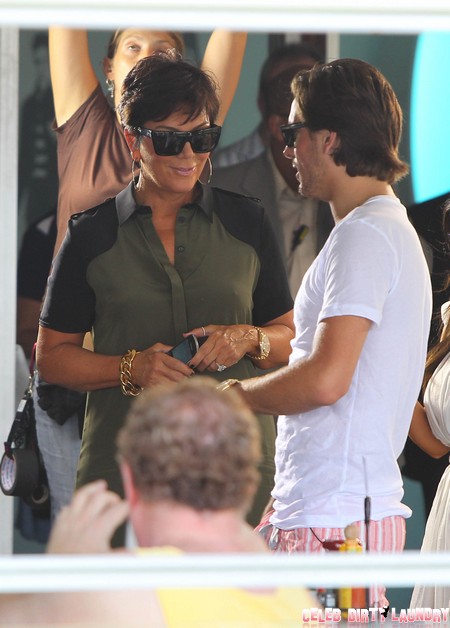 Kourtney Kardashian, the least scary Kardashian, has drawn up a chore list for baby daddy Scott Disick. According to Kourtney, she drew up the chore list “in an effort to get Scott to help more around the house.” There are many things which could send us over the edge in life and make us cry on a wall until we dehydrate, but nothing terrifies us more than a control freak Kardashian. A Kardashian drawing up a chore list is akin to being suffocated by June “Mama Boo Boo” Thompson while we’re sleeping on a hammock, on Survivor. The Kardashian control freaks have been able to possess and moph everything in modern day life to suit their evil purpose, including morals, reality television and celebrity status. Therefore, it is only fitting that Kourtney continues the obsessive control trend. Like mother like daughter, right?

We all know by now that Scott Disick actually despises Kourtney and that there’s really no true love in their relationship. He has been dispelling marriage rumours for several years, even though he has knocked up Kourtney twice. Luckily for Kourtney, there are no immediate sparks of infidelity in the marriage and Scott seems to present an image of marital loveliness. A chore list like this will merely extend the despotic control the Kardashians have over the men in their life.

We know Kim Kardashian’s rule over Kris Humphries was one of fraudulence and misrepresentation, because nothing in the Kardashians’ lives is ever real – they’re stuck in a fantasy world as imaginative and as savage as Zimbabwe. Kris Jenner is a prime example of this possession, with her matriarchal control over Bruce Jenner’s life. According to the Kardashians, they aren’t manipulative; they’re merely a happy family with loving bonds. Yeah, right.

Scott wasn’t pleased about the chore list. He despises the exacting control of the family his sperm bred into, and there’s nothing he can do about it. We wouldn’t be surprised if the Kardashians force their significant others to sign contracts during the respective “Keeping Up With The Kardashians” seasons. This would explain the fraud accusations by Kris Humphries and would also explain the Exorcist-like structure of the Kardashian family. One thing is for certain, the Kardashians will give the meanest mafia bosses a run for their money.

Let us know your comments in the thoughts below. Do you like the Kardashian family? Is Kourtney a fool?