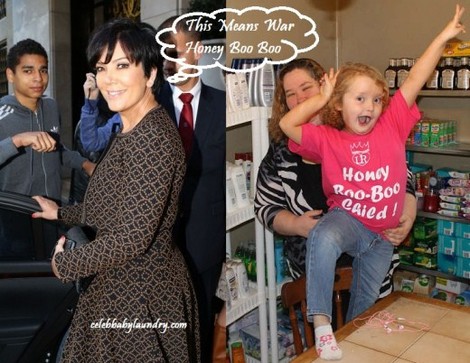 Honey Boo Boo aka Alana Thompson and her colorful Mama Boo Boo, June Thomson, were on Anderson Cooper’s daily talk show recently, where they spoke out about the Kris Jenner jealousy which is starting to plague Here Comes Honey Boo Boo. According to Kris Jenner, the immortal horror from Keeping Up With The Kardashians, she doesn’t like the show, nor does she like June or Honey Boo Boo.

In a battle of the reality show momagers, June spoke out about how unfazed she is by Kris Jenner’s less than appealing attitude towards her. Cooper asked her if she was rattled by Kris’ critique, to which she replied, “Oh well you know it’s just like any kind of critic, you can’t make everybody happy all the time.” These are words of wisdom, spoken by a true fame obsessed loon. Here Comes Honey Boo Boo, in its premiere season, has been a ratings darling for TLC and has garnered more attention than any reality television show currently being shown on television due to Honey Boo Boo’s open Jerry Springer family. They have taken control of the airwaves and it seems that Kris Jenner is a bit jealous about this popularity.

June continued and said, “In life there is going to be criticism… There is [sic] people who love us and people who hate us. We appreciate the people who support us and all through this and the people who hate us, it’s a part of life everyday. We are real, we are not scripted. We are who we are, we are loving and I love being around my family so that’s all that matters.”

A source told RadarOnline recently, “To say Kris is not a fan of Here Comes Honey Boo Boo is an understatement. She thinks the Thompsons are classless, unlike her family and can’t understand why America is so fascinated by them. The show has become bigger than Keeping Up With The Kardashians, and Kris is starting to feel threatened by its success.” Kris, did you drink too much alcohol last night? Are you serious? The Kardashian family is the most classless family in the entire United States, bar none! Your husband, Bruce Jenner, is a prosthetic faced freak and all of your daughters are either insane or are morally so out of touch with reality that they could be Super Mario Sisters for all we know!

Yes, we have been extremely critical of Honey Boo Boo’s family and we still believe they are actually characters from a Wes Craven film script, but at least they have the guts to show their family in all of its dysfunctional glory, unlike certain people we know who try to hide a collection of Donner Party skeletons in their closets.

Let us know in the comments below if you’re siding with June, Kris, or neither.