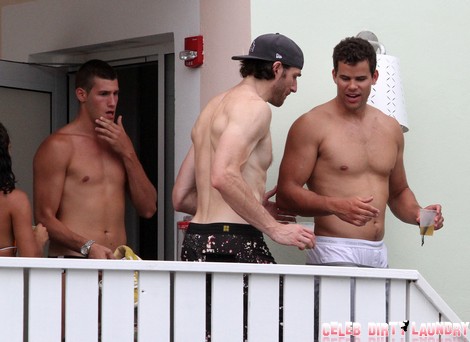 Kris Humphries, the ogre who destroyed Kim Kardashian’s image (allegedly), was in a bit of a skirmish last night in Boston’s TD Garden. Before you jump to silly conclusions, it wasn’t a bar fight with Bubba and his cohorts from Alcatraz; it was with Celtics guard Rajon Rondo during a basketball match. According to a latest, exclusive RadarOnline report, “The skirmish began after Humphries fouled Celtics center Kevin Garnett, causing an upset Rondo to shove Humphries’ chest, and get one back in return.” The basketball brawl didn’t end there, however, because not long after the bitch slappin’ and chest puffing, Celtics guard Jason Terry and Nets forward Gerald Wallace both began shoving and pushing like a gaggle of women at a Prada sale. The basketball brawl spilled over into the courtside seats, but luckily none of the game’s attendees were harmed during the fight.

All three players, except Jason Terry, were disqualified from the game, and Garnett was “handed a technical foul in the incident.” Humphries then tweeted an image of his busted arm with the caption, “Anyone know where I can quick get a shot in Boston?” Obviously, the ex-reality television star and part-time Kardashian hater was referring to a Tetanus shot, because, you know, basketball players carry Rabies and such.

According to RadarOnline, Rondo’s little temper tantrum “cost him a potential milestone, as the early ejection ended the superstar point guard’s streak of 37 games with at least 10 assists – a tie for second highest of all-time, and just nine short of Magic Johnson’s record of 46 in the 1983-84 season.” If we knew what that meant, we would have given you a play-by-play, but unfortunately we’re not sports writers, nor do we care, really. Although Humphries and Rondo didn’t speak to reporters after the match, the veteran Terry spoke to CSNNE and said about Humphries, “Some guys are tough, some guys pretend to be — he’s one of those that pretends to be.”

Shame, the Humphries bear lost his Kardashian honey, and now all of the bees are out to stab him repeatedly in his throat. Tsk-tsk, you know what they say about a man who can’t control his temper… No, Aunt Mildred, it’s not the same as the size of his feet!