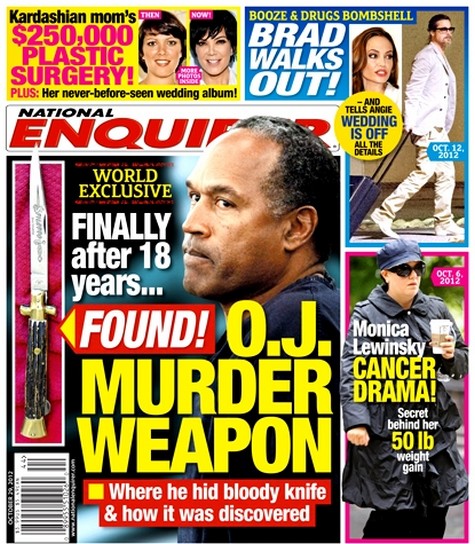 The current issue of National Enquirer features the cover story “Kardashian Mom’s $250,000 Plastic Surgery!”  The magazine has managed to get their hands on copies of Kris Jenner‘s 1978 wedding photos to Robert Kardashian and of course they are going to reveal all to us!  This is the first time the photos have been revealed, Kris has been praying they would not be revealed.  This week Kris Jenner’s $250,00 plastic surgery secrets are being revealed.

Kris was only 22-years-old when she married Robert and her face looked a lot different.  Kris has clearly spent a lot of time at her doctor’s office getting work done.  I wonder if the doctor gives them a group discount plan?  After all daughter Kim Kardashian and new hubby Bruce Jenner have also been on the plastic surgery band wagon.

I can’t wait to get my copy of National Enquirer this week to see Kris’ wedding photos.  Since it was in the 70’s I am betting their will be a lot of big hairstyles and funky clothes.

Also included in this week’s issue NE is claiming that Monica Lewinsky is having a cancer drama.  Monica’s claim to fame is having the dress that ex-president Bill Clinton deposited some of himself on. They have the secret behind her whopping 50lb weight gain and they are going to reveal all to us.  Too many Twinkies???

To find out all the details of Kris Jenner’s plastic surgery and see the photos from her first wedding, pick up the current issue of National Enquirer.