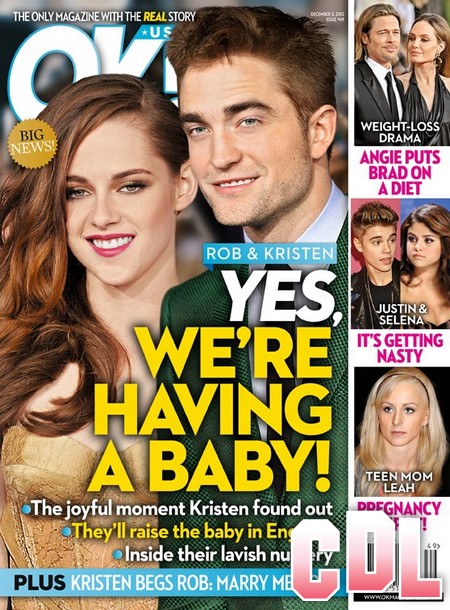 It looks like that reconciliation must be going pretty well between Robert Pattinson and Kristen Stewart because if the latest rumblings are to be believed, they are expecting their first child together!  The couple originally split up last summer after Kristen’s very public dalliance with her ex-boss, Rupert Sanders left Rob absolutely crushed. It took him months to agree to see Kristen again but in late September there were rumors of a reconciliation in the works.  Supposedly sex was not on the table for the couple as they worked on their issues, but I’m guessing that rule was pretty short lived because they are said to be over the moon with this baby news.

The December 3, 21012 issue of OK! Magazine has on the cover details on Rob and Kristen’s plans for their new family-to-be. They say the couple is likely to raise the baby in England and Kristen is now begging for a quickie wedding this winter. Kristen doesn’t want to have the baby before she is married.  Who knew the Trampire was so conventional? Twilight fans must be thrilled to hear of these new developments!

Also in the new issue of OK! is the latest on Teen Mom 2 star, Leah Messer. She is 20ish and on husband number two while expecting baby number three – yes, she is complete f*ck up. Leah seems to have some serious issues and likes to hop from guy to guy, even while married, so it comes as no shock that she and husband of 6 months, Jeremy Calvert are on very shaky ground. The rumors keep circulating that they have already split in spite of her being 4 months pregnant with Jeremy’s daughter. I have to wonder if she would have been better off never appearing on Teen Mom in the first place. But could it have made much difference with such a loser? These girls’ lives only get messier after they do the show or so it seems. Grab the latest issue of OK! to read all about Leah and Jeremy’s mess of a young marriage, if you must.

So do you buy OK!’s story about Rob and Kris?  Is this why Kris just quit smoking?  Let us know in the comments below.