Kristen Stewart And Robert Pattinson Planned For Baby Before Split 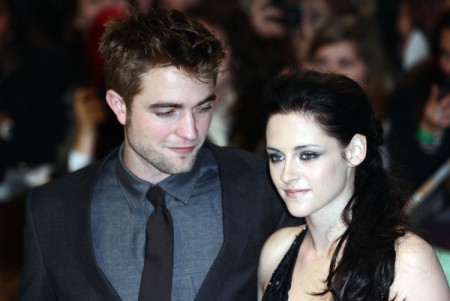 To make matters worse for Kristen Stewart, she not only cheated on Robert Pattinson but she also cheated on the dreams for their unborn baby. Yes, you heard me. Female First magazine is taking the story that one delicious step further and declaring that Kristen and Rob were mere seconds away from adding a baby to the mix before Kristen was caught cheating with Rupert Sanders.

“They had been talking about having a baby together once ‘Twilight’ ended, which is what makes this so extra-painful. Kristen knew how badly Rob wanted to start a family, and it was a subject that had dominated their conversations in recent months. Rob would be a great father, and having a baby would probably have brought them even closer together,” a source told the National Enquirer. “Kristen fears she’ll never have the chance to get Rob back, and that their baby dreams are now totally shattered. Kristen feels so terrible, this is truly a nightmare for her, but there’s nothing she can do to turn back time. If Rob takes her back at this point it will be a miracle, but she knows she only has herself to blame.”

Wait, I thought Kristen Stewart was pregnant already? Or is it like I smuttily surmised before that the pregnancy story was just a way for Kristen to get Rob’s attention? Now that we know the couple thought having a baby would make them closer, it’s an obvious assumption to make. I just can’t see Kristen pulling a Miley. Have you heard the story behind that new phrase? Apparently Vampire Diaries’ star, Nina Dobrev, was asked if she was engaged to co-star Ian Somerhalder and she just laughed and said, “I’m not going to pull a Miley!” I just think that’s hilarious!

Anyway, the fact that Kristen and Rob were talking baby and even considering buying property on the Isle of Wight makes this whole situation that much sorrier and telling. Maybe Kristen wasn’t bored with her relationship. Maybe she was scared and nervous over the major changes that were coming along with graduating from Twilight. Rob is four years older. Maybe he was asking for things that he was ready for (house and baby) but Kristen wasn’t. I just don’t know. Don’t get me wrong, I’m not defending Kristen… maybe I am a little, but I’m not condoning her behavior at least. People do stupid things at 22. They cheat. They lie. They get married and consider having babies. She was obviously ripe for it.

But from a career rebuilding point a view a baby probably looks great to  Kristen right about now. Just think of it. Is it enough for Rob to take her back? There’s nothing more image refurbishing than getting pregnant (see also: Angelina Jolie). Is this why Kristen’s begging for him to take a romantic vacation with her to the Isle of Wight? I’m just saying, if Kristen wanted to turn everything around for good, Rob plus baby equals total Twihard redemption.

Do you believe Kristen Stewart and Robert Pattinson were contemplating getting pregnant before Kristen’s affair broke? What do you think their chances are now?