Report: Kristen Stewart Cheated On Robert Pattinson With Taylor Lautner and Others! 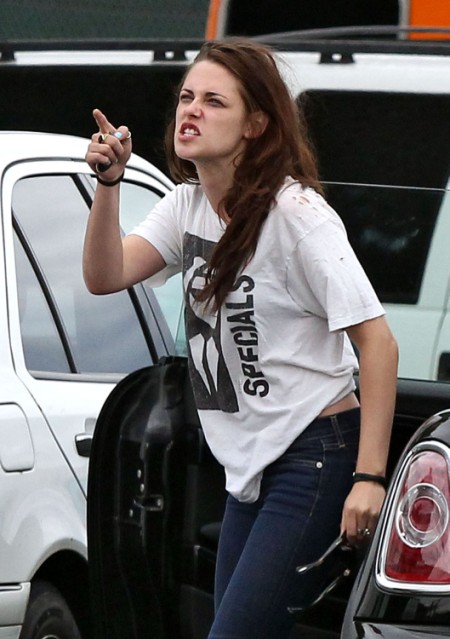 Remember how when word of Kristen Stewart’s affair with Rupert Saunders broke all of the Twihards found it nearly impossible to believe that their favorite sour puss would ever betray anyone let alone Robert Pattinson?  Well it seems that the perpetually unhappy home wrecker has a long running problem with keeping her legs shut.  When Kristen and Rob first got together on the set of the original Twilight movie, it was hardly a secret that she was still entangled with longtime love, Michael Angarano. Apparently Kristen kept Michael on speed dial for a lot longer than she led Rob to believe.

Now, according to OK! Magazine, October 29th print editon, on-set flings and quickie hook ups are just a part of the job for Kristen. She even got a bit too close to Taylor Lautner while pretending to be Rob’s girlfriend.

“Everyone knows about their friendship, but not very many people know how close they really got. Kristen would make excuses to hang out with Taylor when they weren’t filming. She even lied about it to Rob.  When she worked on Welcome to the Rileys, she had a full-on fling with one of the production assistants. Luckily the guy had a girlfriend, so he was just as paranoid as she was and they kept it pretty well hidden.”

If OK! is correct then Kristen and Rob’s relationship has never really been an exclusive one – at least not in her mind anyway!  A woman that always needs a side dish is clearly not ready to be in a long term, supposedly committed relationship, that’s for sure!  It sounds more like Kristen thrives on the rush from a hidden relationship which is kind of ironic when you consider how hard she and Rob originally tried to keep their love affair under wraps.

Do you think Rob really realizes that this chick is just not capable of being loyal to him at this point in her life?  If she has already cheated with 3 other men while proclaiming happiness with Rob, why on earth would he even dream of trying to fix this mess of a relationship? Tell us your thoughts in the comments below.