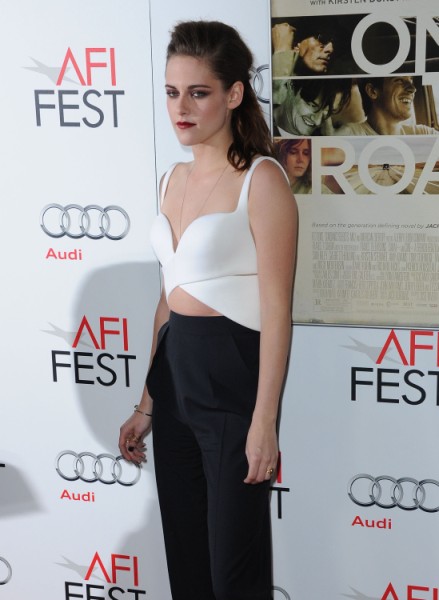 Kristen Stewart is proving to be a whole lot shier over her love with Robert Pattinson when the cameras aren’t around.

While out to eat this weekend in NYC where the couple are promoting the final Twilight installment, Kristen had to remove Rob’s hand from her ass in front of a crowd of people. And that’s not all. Onlookers told the New York Daily News that Kristen snapped at Rob, “Don’t kiss me” when he moved in to give her a little love. Sources also said there was a “chill in the air” when Kristen entered the restaurant to meet up with Pattinson, Sienna Miller, and two other friends.

Why so sheepish Kristen? You didn’t seem to mind sucking face when a camera hid behind the bushes of your LA home. You know what I’m going to say, right? Biotch needs to let that poor boy love her as much as he wants after what she just put him through! But, on the other hand, how long is groveling appropriate? They’ve been back together now for one month, two months? Has it been enough time? After two months can Kristen drop the penitent man behavior and go back to her crusty self who’s obviously in full control of that relationship? I get why she doesn’t want Rob Pattinson’s PDA in the middle of a restaurant. She’s uber paranoid and people are watching them everywhere. Still… if she’s going to pass on a Rob kiss she should probably do it with a wink and a smile and not a sharp rebuke.

Poor Rob. He just always seems like a sad puppy to me looking for any attention he can get and she shut him down! Can you give her a break though? Do you understand why Kristen acts this way or are her two faces beginning to show? Kristen plays nice for the cameras but the second her job is over she turns into a sullen teenager. I wouldn’t have a problem with this if Kristen’s always been private. But let’s not forget. She issued a PUBLIC apology after the cheating scandal. She shouldn’t get shitty with us – or poor Rob – now that the Genie’s out of the box and has no intentions of going back in.