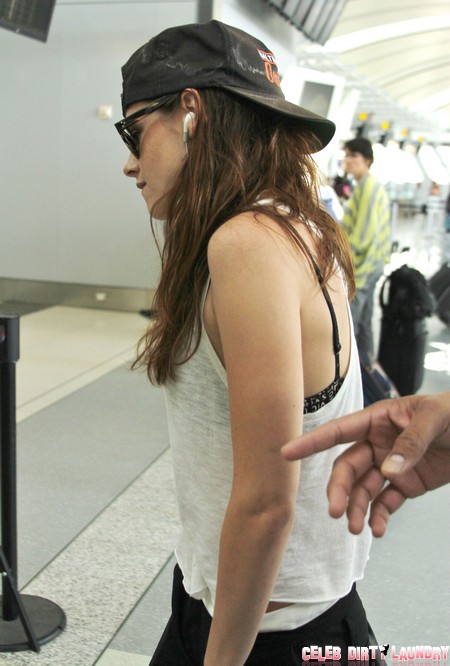 The Toronto International Film Festival was a big occasion for Kristen Stewart. It was her first public appearance since news broke of her affair with married Snow White and the Huntsman director Rupert Sanders. We have been covering her post-break up life, from wearing Robert Pattinson’s clothes, yelling at Nick Casavetes in a parking lot, getting expert PR advice from Roy Cohen, to more extreme things, like the possible breakdown of the Breaking Dawn promotional tour (new reports claim that they’ll be appearing together), and her steamy flirting with James Franco.

We applauded the comeback of Kristen Stewart. Sort of. All she really did was put on a dress and abstain from openly dissing the people around her. Those pro-Kristen signs held up by fans at TIFF probably did her morale a lot of good. But now we’re realizing that this wasn’t KStew’s comeback! It was just an extended acting session!

That’s right folks. Kristen’s good behavior at TIFF was all on behalf of her image. A source tells us that, as she was heading to the airport, the young celeb snapped at her bodyguard, yelling, “don’t fucking touch me, dude!”

God, girl! Isn’t that sort of out of character? Since she lets every other guy get some! (Well, Robert and James and Rupert. But still!!) If you can’t trust your hired staff, whom can you trust? I predict dark days ahead for Kristen if she’s going to be a bitch to everyone she comes in contact with. Kristen needs to remember that the best thing she ever did was get a part in the Twilight movies. If it weren’t for Bella, she’d be nothing!

Actress Kristen Stewart in a grumpy mood as she catches a flight out for Toronto after attending the 2012 Toronto Film Festival in Toronto, Canada on September 9, 2012. Kristen told her bodyguard, ‘Don’t Fucking Touch Me Dude’ when he tried to help her through the crowd. Kristen who is still in denial after her break up with Robert Pattinson is seen wearing his sweaty Baltimore Orioles hat at the airport.