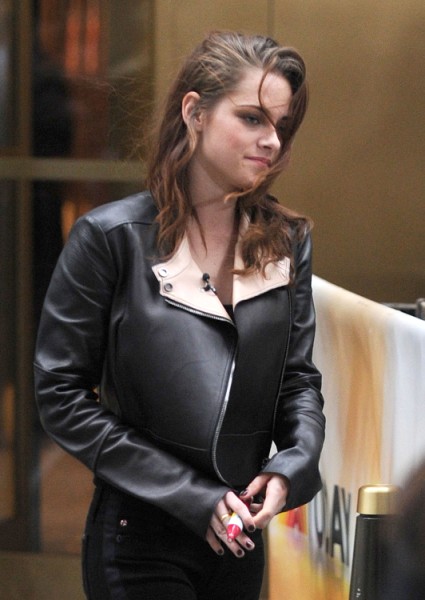 At the press junket for The Twilight Saga: Breaking Dawn – Part 2, Kristen got all fidgety and replied, “No one’s positive or anything, but I think there’s a strong possibility.”

Wait a minute, wait a minute. Beep, beep, back up the truck. A Kristen Stewart/Snow White and the Huntsman sequel? Last time I heard Kristen was shelved and the project was going to take on a more Chris Hemsworth-focused story line which was fine by me since he was the only reason worth watching the first one. I shouldn’t be surprised that isn’t turning out to be true. A lot of rumors went crazy during the whole Mini Cooper scandal. Who knew what was real or fake? But Rupert Sanders is still listed on IMDB as the sequel director, which means nothing I guess,but there’s no way in hell those two are teaming up again. There’s no way their significant others would allow it and there’s no way the studios would give the OK. Too much drama waiting to happen!

So was Kristen just messing around? That reporter deserves two claps for asking the question to begin with. It was definitely loaded but she had the balls to ask it anyway and Kristen had to answer because it’s not like Rupert’s name came up or anything. It was just unbelievably implied. Do you know about plans for the sequel? Are you going to have sex with Rupert again? Are you? Are you? So Kristen answered but maybe she really didn’t. Maybe she just meant she heard the project was going forward but she wasn’t going to touch it with a ten-foot pole.

Take a look at the interview here. It’s only 21 seconds which is nice. What do you think Kristen meant?