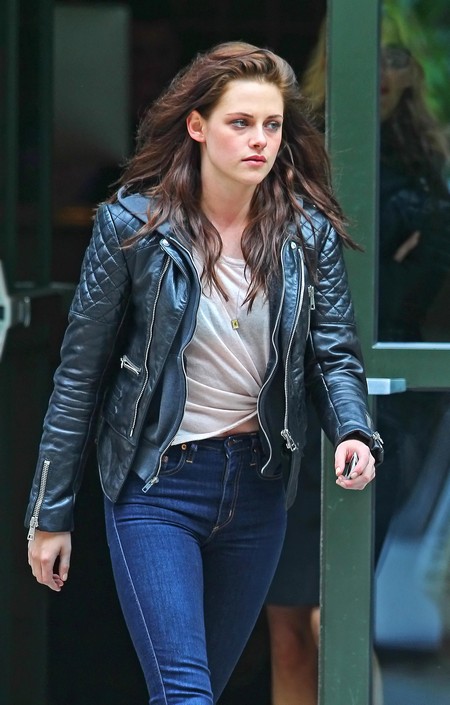 Kristen Stewart has plenty of groupies but she is a groupie of sorts, too.  While Katy is renowned for sleeping with, or trying to sleep with, every available celeb – of both sexes – and partying wildly, Kristen has a far more subdued lifestyle.  Some might even say that she seems frigid.  Kristen stopped in to see Jimmy Kimmel and discussed hanging with Katy Perry while promoting her new film, “Snow White and the Huntsmen”.

“I have a buddy who has absolutely no qualms being in front of millions of people,” she started to explain. ”I’m not dropping – I feel like a weirdo right now – I was with Katy Perry.  I walked behind her through…she wanted to sit up front. She’s like, ‘Hey, you want to go watch the Tupac stuff? It will be awesome.’ I was like, ‘Yeah!’ ”

It seems even being with a celeb like Perry, who embraces fame and her fans, didn’t keep Stewart from her normal shyness.  She was uncomfortable when Perry called attention to them both in the large crowd.

”And then suddenly I was like, ‘What are you doing to me? Ah!’ And I suddenly had to put my hat down because we were literally like Moses parting the waves of Coachella getting to the front.  I was her entourage. I was leading her entourage.”

Do you think Kristen Stewart will ever be at ease in the public eye – or in her own skin, for that matter?  Can someone like Katy Perry help break her out of her shell a bit?  But would Kristen want to become a complete hedonistic egomaniac like Katy? What are your thoughts on this friendship?