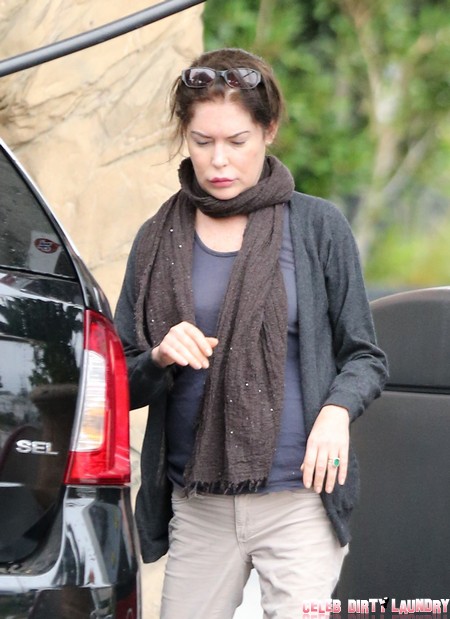 Yikes!!! What the heck is happening to Lara Flynn Boyle’s face? Extensive plastic surgery has taken its toll on the once beautiful and desired actress. She has been called everything from “trout-pout” to “joker-face”, which is a little funny because she used to date Jack Nicholson, who played the joker in Tim Burton’s Batman movie. But even after all the name calling; it looks like Lara Flynn Boyle still has no intention of stopping the plastic surgery procedures. The 42-year-old was spotted visiting a gas station to fill up her car on Saturday and certainly wasn’t looking her best due to her sloppy outfit, frail frame and wrinkle-free but strange looking face.

Boyle might only be 42-years-old without a wrinkle on her face (Botox, anyone?) but she looks like a woman in her eighties. I know this might sound strange to some people, but plastic surgery, especially not done correctly, can make people look older, not younger. With a lot of these stars, I often wondered if they would have looked better if they had just let nature take its course, naturally. With her skinny legs and arms and her distorted and bloated stomach, she sadly reminds me of those children on television. You know, the ones who live in terrible squalor in some poverty stricken country, who are painfully skinny but have bloated stomachs due to malnutrition? And there’s always a genteel voice in the background asking you to donate money to “save the children”. Well, someone needs have to “save” Boyle from her plastic surgeon…and then give her a juicy burger to eat.

Now, I understand it must be hard to be in show business for an older gal. Always looking behind your back for the next 20-year old poptart to take your place, it has to be incredibly tempting to get plastic surgery to look younger. But when is enough enough? I’d say enough is enough when your face looks like it’s actually melting off of your skull.

Dr. Paul S. Nassif, a plastic and reconstructive surgeon in Beverly Hills,(also the husband embroiled in a nasty divorce from the Real Housewives Of Beverly Hills star Adrienne Maloof) has said, “Lara Flynn Boyle appears to have had rhinoplasty, lip augmentation, Botox, facial fillers, and possibly a browlift and facelift.” He continues on to say: “She should refrain from having any additional procedures and would not benefit from having further work performed at this time.”

Yes, refrain from any more. That means stop. Stop and let the Botox and whatever else is pumped in that face of hers disintegrate so she can go back to looking like a human being.

What do you guys think? Does she look as good as she ever has, or should she lay off the Botox and fillers?