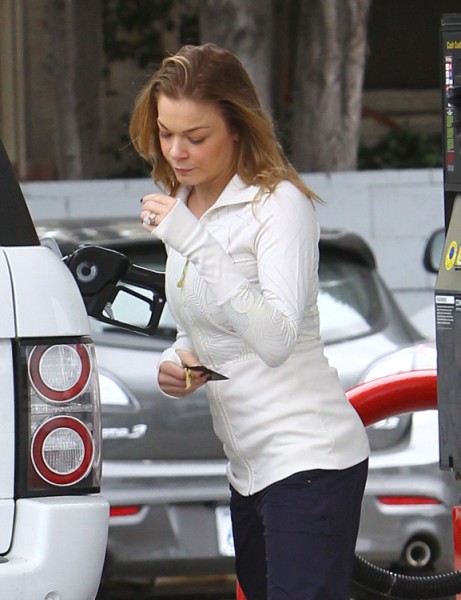 So kicking off her shoes and crying on the stage in front of fans wasn’t as effective as she thought because now she’s taken the circus that is her life to some place much more bonafide – The Tonight Show. LeAnn Rimes sat down with Jay Leno yesterday and apparently talked about a new album. I couldn’t figure out what this woman had to promote besides a seedy marriage but she does have an album and is dueting with Carly Rose Sonenclar on the season finale of X Factor Wednesday night. So there’s that.

But who cares about that?? No one! Get to the good stuff! And luckily for us, LeAnn doesn’t disappoint.

Cue Brandi Glanville! LeAnn Rimes couldn’t help it and let herself be egged into a conversation about Eddie Cibrian’s ex-wife. Jay asked her how it felt having Brandi on a reality TV show and LeAnn responded, “There’s no ‘reality’ in reality show…. Here’s the therapy coming out of me. I should feel flattered that she thinks I’m so interesting that I can be a storyline in her show.”

Well that’s not so bad, right? If somebody called me a country c-nt, angelfish I think I’d have been a little less diplomatic. So two points for LeAnn for not going all Hulk on the stage. She also referred to herself as pathetic in one of her songs written about the Eddie affair and Brandi Glanville feud. I’ll see your book Brandi and I’ll raise you an album!

Check out the video of the interview below. What do you think of LeAnn? She looks a little rough, right? A little, broken? It’s got to be hard to come out and defend your decision to help break up a marriage and she went the self-deprecating route. I think it worked for the most part. Still, if someone’s going around calling me an anorexic pill popper I’d do better to keep my eyes wider and comb my hair more. Just saying….