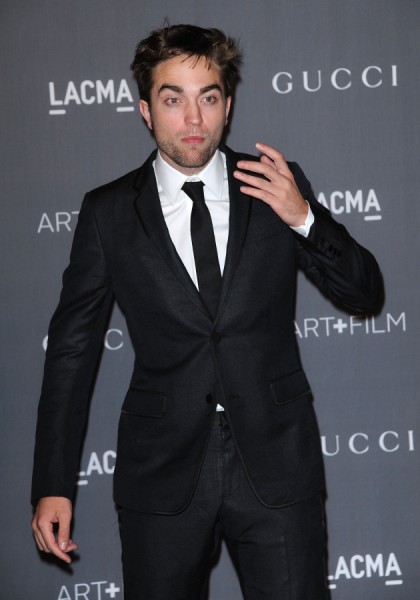 So there were all these stories flying around that Leonardo DiCaprio was interested in saving Robert Pattinson after the Kristen Stewart/Rupert Sanders scandal this summer. Apparently Leo offered to fly Rob to hang out with him and his pussy posse friends in Puerto Rico so Rob could bang nameless women and hate Kristen Stewart in peace without Reese Witherspoon popping over with baked cookies every five minutes. As far as I know none of that ever happened and I still don’t even believe Leonardo even knows Rob’s name but that’s not stopping Rob from using Leo as his endless source of inspiration. According to the Sun, Rob’s quitting smoking because Leo told him it’s bad for him. Apparently surgeon general’s don’t know shit.

But if this relationship is true and not just a figment of Rob’s imagination then I can’t imagine Leo’s generous advice would stop with electronic cigarettes. He’d definitely tell Rob to quit Kristen Stewart along with the dirty habit. Leo dumped Erin Heatherton for the hundreth and (hopefully) final time a few days ago so you can see him advising his friends to do the same. He’s like the Peter Facinelli character in Can’t Hardly Wait who leans on his buddies to break up with their girlfriends after he dumped his so they can bang hot college chicks. But, obviously, Rob hasn’t listened to that piece of advice since he and Kristen are very much together. That’s why I can’t see this Leonardo DiCaprio/Robert Pattinson bromance really happening. Leo is very much a bros before hos kind of guy and Rob has been addicted to Kristen Stewart for the past three years now. Leo would never let a girl publicly humiliate him and live to stay on as arm candy. Leo’s always known that pretty faces come and go. That’s what I like about these models. I grow older. They stay the same age. Rob doesn’t think that way. I get the feeling he’s got too much of the sentimental artist in him.

But this is all hypothetical. As I said, I’m not even sure Rob and Leo run in the same circles in Hollywood. But let’s say it is real. If Leonardo DiCaprio orders Robert Pattinson to quit cigarettes or do anything, should he do it? Isn’t it just too precious that the teen heartthrob that all the little girls are throwing their training bras at is idolizing the old teen heartthrob? Can you believe Leo is almost 40? Hands down I think Leo gets the best roles in Hollywood at present and is the Nicholas/De Niro of our generation. You would listen to that, right? You’re an up-and-coming Jack Dawson 2.0 and your idol tells you to ditch the smokes and the baggage and be sure to care about those polar ice caps… you should pay heed, yes?