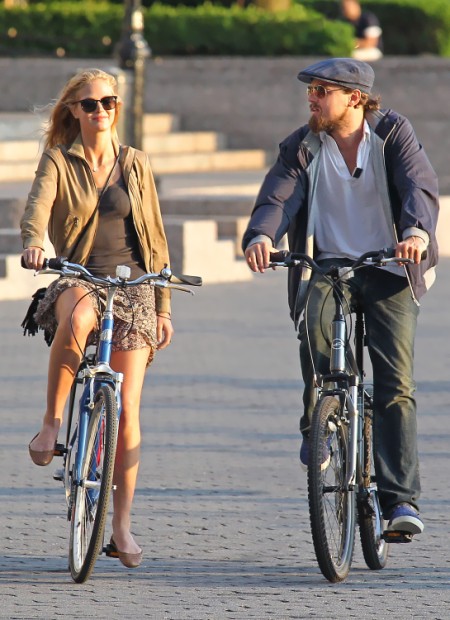 All those half-naked pictures Bar Refaeli likes to tweet must be working because Leonardo DiCaprio and girlfriend, Erin Heatherton, are on the rocks and the actor wants to reunite with the Israeli model. There’s only one little problem – Bar wants nothing to do with him!

Leonardo DiCaprio might look like a man in lust with Erin Heatherton, but insiders say he’s still hung up on his ex, supermodel Bar Refaeli.

“Leo is using Erin,” said a close pal of DiCaprio. “She’s nice and all, but she’ll never win his heart. He hasn’t gotten over Bar, and in many ways he never will. She’ll always be the one who got away.”

Leo and Erin cozied up in Hawaii recently, and while she’s reportedly madly in love with him, DiCaprio’s pals say she’s headed for heartache.

“Erin’s playing the perfect low-maintenance girlfriend, but Leo’s going to get bored with that fast,” predicted another source. “He loved Bar’s feistiness and her ability to stand up to him. She was the only girl who was able to drag him home to play dutiful boyfriend. He wanted to marry her and even considered converting to Judaism for her.”

Bar finally called it quits with Leo in May 2011, and “Leo didn’t quite realize it was for good because they’d split so many times… and when he heard she’d started seeing other men, he reacted by going on a womanizing rampage.”

“Unfortunately for Leo, Bar wouldn’t touch him again with a 10-foot pole… she’s moved on after making the mistake of thinking she could change him. But Leo will always have his ego and his roving eye. Don’t feel sorry for him, though. He brought it on himself. The one who deserves sympathy is Erin. She’s a really sweet and genuine girl, but she’s just another notch on his bedpost.”

I’m telling you, we can all thank Shaun White for this. Bar’s been seen hooking up with the X-Games God and that’s got to be driving Leo crazy! CDL reported that Leo was all about Erin’s laid back, lack of drama, but apparently that couldn’t be farther from the truth. I’m all about Bar not taking him back. He’s not going to marry her! He wouldn’t even marry Gisele Bundchen but she smartened up. Bar needs to do the same.

Is Leo losing something? First Blake Lively ditched him for Ryan Reynolds and now Bar won’t take him back. Maybe girls are just on to his game. He better come up with some better lines because not everyone is stupid enough to think they can change his bachelor ways. Sorry Erin.