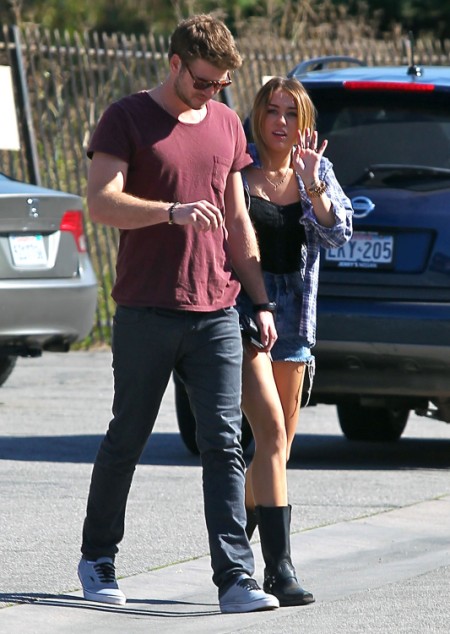 Miley Cyrus’s been flaunting her toned abs and perky ass up and down the country lately, but fiance Liam Hemsworth isn’t loving her heroin chic look and demanding Miley eat more or their wedding is off.

Good for Liam! It’s not every day you get a Hollywood dude forcing his girlfriend to put on weight. David Beckham pleaded with Victoria for awhile, but she obviously didn’t listen. But Victoria already had David by the balls – they were married with kids. Miley might have the ring, but she doesn’t have the official papers yet, so this ultimatum might just resonate. Star magazine via Hollywood Life reports Miley’s diet is so extreme she’s eating just 500 calories a day and working out up to three hours every day. Naturally, the magazine says it was all born out of insecurity. “The ridiculous thing is, she started this regimen because she was worried Liam would fall for his [Hunger Games] co-star Jennifer Lawrence,” a source said. “She decided that the only way to keep him was to get the best body of her life.”

But it worked. Miley’s gotten more attention now then she ever got making crap movies. But I don’t think her confidence is getting any stronger. Would you wear those outfits if you were crazy confident? I think not. They are strictly a cry for attention. And now Liam is giving it to her, but it isn’t the kind she wants. I doubt if she’ll listen though. This isn’t the first time she’s chosen her hot body over her fiance. I’m sure it won’t be the last.

And I’m not sure I buy the 500 calories a day thing. Miley looks toned and skinny, but not anorexic. And it isn’t a big deal to spend 2 hours in a pilates studio. It’s not crazy cardio. I know a lot of people who take a couple classes a day. I used to do it and I wasn’t super skinny from it. You would just get toned and lithe, which is exactly how Miley looks. However, I can see why Liam would want her to put on some pounds. Some men just like the extra padding. I appreciate that, don’t you?