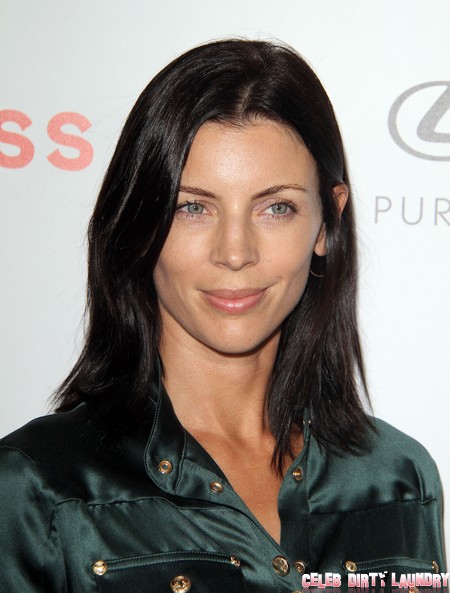 Liberty Ross has finally broken her silence on the cheating scandal between the not-so-talented Kristen Stewart and Ross’s faithless husband Rupert Sanders. Liberty just walked the runway for style god Alexander Wang’s Spring 2013 show last month and talked on camera to Style about her life and frame of mind in the wake of this summer’s cheating revelations and subsequent breakdown of her marriage.

In Liberty’s video she confesses, “I have a really good balance. I’m very happy with my life. I’m lucky. I have good people. I have two amazing children.”

Notice what’s missing in the list of things that make her happy and feel lucky? No mention of her wayward hubby Rupert! Looks like she’s got her priorities straight and is focusing on her kids. That’s a good things since their cheating Dad apparently wasn’t concerned about when he was snapped by paps kissing Kristen Stewart in her car and then disappearing out of the camera lens’ sight doing God knows what to Robert Pattinson’s squeeze!

Liberty continued her voice-over interview (which runs over gorgeous shots of her modeling Wang’s spring fashions), “I believe we’re all on journeys and we’re all given lessons in life. Sometimes when things seem really bad, you have to be able to see the good and learn from it and just move forward as graciously as possible.”

Unlike Kristen, who’s been scrounging around LA looking like a homeless scrub, Liberty has remained beautiful and collected even while meeting her cheating hubby (who may or may not soon be an ex) for counseling and at her lawyer’s office.

She may well be planning on moving forward since Liberty’s been seen head held high, out and about without her wedding ring. Good for her! If Ross can’t check himself before he wrecks himself over someone as flat and undesirable as Kristen, what can his wife expect when he works with a talented and beautiful actress?

Liberty also told Style, “I don’t like being trapped or feeling that I’m not able to move forward. I do think this year is kind of the end of some things and the beginnings of something else. And I think that beginnings are always exciting.”

Rupert’s wife may already have a new beginning in her life – she was spotted out with her ex-lover Christopher Taylor during London Fashion Week. Liberty was spotted arm in arm with Taylor, sans ring and looking very happy – and excited…

Even if Liberty doesn’t carry on with rekindling with her ex, she’s a beautiful woman who no doubt won’t be alone for long. She closed her confessional by saying, “And change is really important in life, but I’m still the same girl when I go home and it doesn’t matter what I do during the day or where I go or who I’m with, I’m just Liberty and that’s really important to keep hold of.”

Rupert’s wife continues to be a class act – even as the scandal broke, she commented infrequently and cryptically. The closest she came to a slam was when an Instagram post of a cartoon image of Snow White crying and drinking included the caption “Not so pretty or so pure after all…” came from the account libertyross.

Liberty also tweeted from her account “sometimes good things fall apart so better things can fall together” and a photo of an eagle soaring with the simple caption “Liberty” and finally simply “Wow” before deleting her twitter account altogether.

Throughout the entire cheating scandal, I give props to the victims Liberty and Robert Pattinson for holding their tongues – even if Kristen and Rupert chose to let theirs roam free…