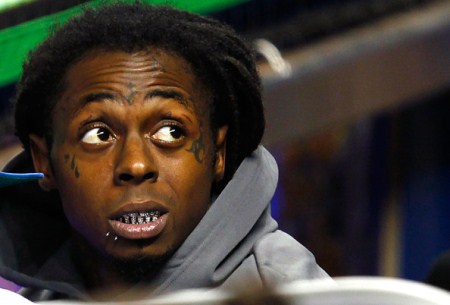 Lil Wayne denied entrance to NBA playoffs and he’s completely shocked about  it. A representative of Lil Wayne’s told TMZ that he in fact did not have a ticket; the game was already sold out before he called. But of course Wayne didn’t stop there, he took the time to complain about it on Twitter when he tweeted, “Going to the Thunder game tonight but was denied by the team to be in their arena. Wow.”

Not only did it suck that he missed the game but apparently it was a pretty amazing game as well, Thunder ended up winning the game 108-82. But I don’t see why Wayne’s all butt hurt over the fact that he didn’t get in, I bet there were many other people who faced the same problem; no ticket, no entry. But I bet all those other people didn’t go and tweet it as if it was some sort of big deal, not everything you want to happen in life will and Wayne is just naïve to think he deserved to be there more than anyone else.

Just because Wayne is famous and has money doesn’t mean he should get special benefits, he just get sad and think about how much it sucks that he missed the game like everyone else does. Then, just move on, missing one game won’t kill you. It’s not like he went to the “Hobbit” film on opening day and found out it was sold out, because if that did happen, then he would have all the reasons in this world to cry and be depressed, other than that, I’m sure he’ll survive this and there will be plenty more games for him to actually BUY a ticket to!