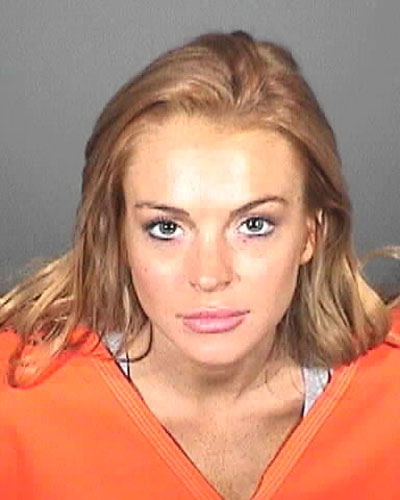 As we already told you earlier today, Lindsay Lohan found herself in trouble (as usual) in the wee hours of this morning when she got into a fight at Club Avenue in NYC and punched some random chick in the face. She was led away in cuffs, charged with a misdemeanor for the assault and was released before most of us even crawled out of bed.  That charge in and of itself could be used as a reason for Lindsay’s probation to be revoked. If you recall, she’s on probation thanks to her part in that jewelry heist in LA awhile back and one of the main terms is that Lindsay MUST follow and obey all laws or risk lengthy jail time.

Hot on the heels of her early morning smack down comes even worse news, the Santa Monica attorney will be charging Lindsay with not one, but THREE crimes today that are connected to her accident on the Pacific Coast highway back in June. At the time Lindsay swore she was not driving the Porsche that slammed into the back of a big rig.  Like most everything that falls from her mouth, it was a lie as they  now have enough evidence to prove that Lindsay was indeed behind the wheel. Thanks to her lies she will now be charged with: Giving false information to a police officer which can get her 6 months in the clink. Obstruction of justice which is punishable by up to a year of jail time and lastly, reckless driving which can be worth 90 days of cell sitting.

If by some chance Lindsay’s probation officer was going to not violate her over the assault charge I’m pretty positive the three west coast filings will result in Lindsay doing serious time. If probation is revoked than Lindsay has to serve the rest of her probation term in jail and I’m thinking that has to be a pretty significant amount of time.

Clearly this chick just doesn’t get it. She can’t stay out of trouble and proves that with a brand spanking new arrest a few times a year. She’s either heading for a long time behind bars or a longer dirt sleep. Which do you think will happen first? Tell us in the comments below!