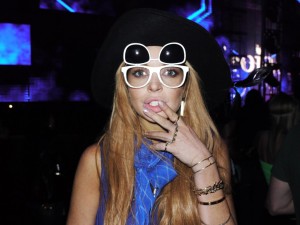 X17online.com is reporting that Lindsay Lohan’s boyfriend is Gavin Doyle, a photographer who has been accompanying Lohan on photo shoots and hanging out with her on her down time.

The site also goes on to add that the duo have been “spending lots of time together the past couple months” and even got cozy at Coachella. Let me just say, just because you get cozy with someone at Coachella doesn’t mean anything. Sure they could be hittin’ it (because I’m sure the definition of “cozy” at Coachella is a little bump and grind of the vaginals), but getting crunk and then finding someone to “cuddle” with is the norm. The only thing is that you probably don’t see that person ever again. You Coachella peeps know what I’m talking about.

A source said that “Lindsay wants to protect this relationship because she feels the media helped break up her and Samantha [Ronson], and she’s really hoping this time things work out.”

However Gossip Cop is reporting that Lindsay and Doyle are such good pals and spending a lot of time together because he’s her assistant.

Remember peeps. There are plenty of celebs out there who have a hot, studly man or gorgeous woman as their “assistant” because really, would could Lindsay need assistance with other than keeping her on the straight and narrow? Ok nevermind, that is a pretty big job. In other words, if this whole Liz and Dick thing turns out fabulously, we can give credit to Doyle.

Click here to see photos of Lindsay with her rumored boyfriend Gavin Doyle.