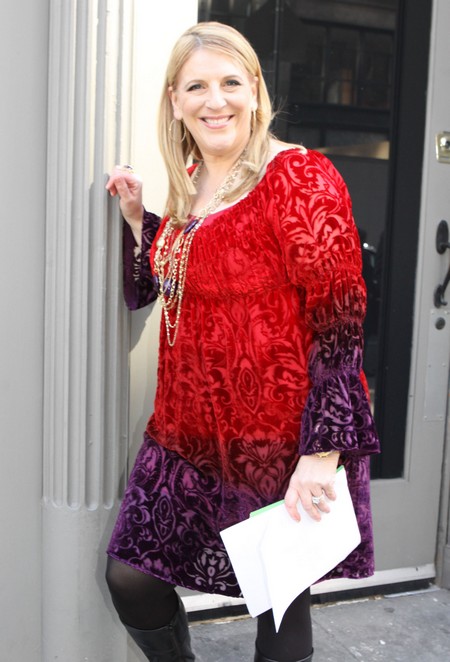 Last week Arsenio Hall had a tough job as Project Manager when he had to put up with an overload of bullshit from Aubrey O’Day after she took over the challenge and claimed the victory as her own. In the boardroom, Arsenio began what later became a complete meltdown. Did you see the episode, if not you can read the full rant HERE.

First, Aubrey stormed off into the infamous elevator at the end of last week’s episode whining, “I don’t want to be around all the negativity anymore. The environment is so ugly. I just don’t know if this is the right place for me.” Then she came out last week and said how she was delighted about the reaction she caused in Arsenio, “I guess it’s flattering that I upset him so much”. She also warned us with a Tweet that she comes back up the elevator.

Now and absolutely not surprising in the least, Lisa Lampanelli called in to Broadminded on XM Sirius Stars Thursday about “Arsenio Hall’s foulmouthed tirade”, she insists it was violent and was afraid for her life! Oh please, like Trump doesn’t have security all around the place – I personally would be more afraid of her than Arsenio, no matter how mad he was. Lisa goes on to say that Arsenio called Aubrey the c-word … and even got violent.

Are you surprised that Lisa is coming forward and bad mouthing Arsenio and defending Aubrey? Not me, those two bitches swear all the time, fly off the handle and criticize others, even using slurs (i.e. Aubrey making fun of Patricia and Dayana in a Hispanic accent) So now all of a sudden it’s not okay for Arsenio to do the same? Both Lisa and Aubrey can dish it out like the best of them, but it’s not ok when someone does it to them.

RELATED: Is Aubrey O’Day The Biggest Whore Ever On Celebrity Apprentice

Lisa claims that the worse of Arsenio’s rant was edited by the show, too bad, I would love to have seen it all. “I call people the “C” word in comedy every f*cking day, I call people the bitch, whore this and that joking around. But Arsenio Hall, in the War Room afterwards was yelling the “C” word and saying I will, “something” “something” all over your face. I don’t care if you call someone a bitch and a whore, but this is when I stepped in because I thought it was sounding violent so why don’t I jump in and defend, not her (Aubrey O’Day) but for all women. I told him, Dude shut the fuck up every woman in America is going to hate you”.

Lisa ends her own “tirade” by calling America stupid if they don’t listen to her. Wow, that makes two delusional bitches on this season, doesn’t it?

So, do you agree with Lisa, are you on Team Aubrey’s side? Or, are you supposedly “stupid” like me, cause I am still on Team Arsenio’s side and firmly believe the bitch got what she deserved?