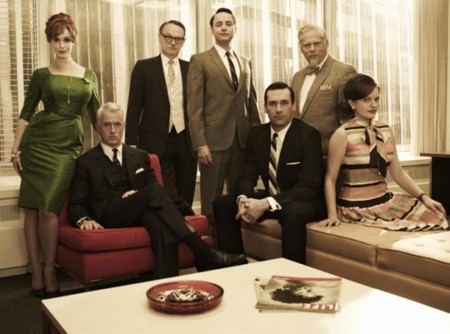 Mad Men was back last night for it’s fifth season opener and it launched into the summer of 1966, more than half a year after it left off.  Don Draper, spent Memorial Day Weekend with his wife, Megan and his children, who gifted him with a shaving brush for his 40th. His real identity is Dick Whitman and shockingly Megan knows about his secret. What did you think about Megan knowing all about her husband’s secret?

Rival firm Young & Rubicam makes top news story when the Goldwater-supporting executives drop a bag of water out their window during a civil rights protest which soaked a woman’s young son. Roger decides to play dirty when he buys a want ad claiming SCDP as an equality-opportunity employer and it makes Joan mistake it for a an attempt to replace her. At first, Lane rejects the advertisement proposal, and then learns that Roger and Don went ahead with it. Wow, could this be a conflict?

Don makes a promise to Pete Campbell that he’ll visit the Mohawk Airlines executives once they win back the account.

After sneaking a peek at Pete’s agenda, Roger crashes the meeting with Mohawk Airlines executives. Pete orders him to leave, do you think he should have crashed the meeting? Pete is in Roger’s vacant office afterwards and trips, he bludgeons his nose on a wall. Yikes, what an idiot! Regardless of Roger’s interruption in the meeting, Pete makes headway with Mohawk.

Ken thinks things are stable with Mohawk, but Pete says, “stable is that step backwards from success and failing,” What do you think, stable or not?

Peggy delivers an upbeat “bean ballet” pitch for Heinz, unaware that Don has put her in an environment where she is free to fail. Heinz executive. Raymond Geiger wants to market kidney beans in a cool way to attract the college crowd. Don, advising Peggy to try again, says the account came in “over the transom.”

Joan, the director of Agency Operations, is on maternity leave while her military-surgeon husband Greg is stationed in Vietnam. Her mother Gail, tries to encourage her to join the ranks of stay-at-home mothers. Joan misses work, Greg will be stationed at the Fort Dix base for his second year. Joan returns to work where Lane may just be her only friend. Wow, don’t you think that is sad?

There is a surprise birthday soiree spoiled by the Sterlings being late. Hostess Megan performs a sultry French cover of Sophia Loren’s “Zoo Be Zoo Be Zoo,” off of the 1960 album “Peter & Sophia” featuring songs by Loren and Peter Sellers. Guests from work found it awkward, Don found it embarrassing. What did you think of it?

Talk about embarrassing, I think Peggy or Harry take the cake, don’t you? A tipsy Peggy complains to the Drapers that she has to redo the pitch alone over the weekend, an unintentional dig at Megan who was the one that wrote the coupons. On Monday, Megan overhears Harry’s lewd account of her sultry French dance. Megan can’t take the stress and pretends sick and leaves early, I would have done the same thing, what about you?. Peggy apologizes to Megan, then to Don, without effect.

Megan is cleaning in her underwear in the apartment and throws a tantrum, Don obviously seduces her and later tells her he didn’t want the party because he didn’t want co-workers in their home.

Pete calls a meeting, he asks to use Roger’s office to impress all the new clients he’s bringing in, the partners laugh off his request.  Roger pays Harry $1,100 a month’s pay, after taxes just to swap offices with Pete.

Pete fools around with Roger’s calendar, sending him on a wild-goose chase to Staten Island at 6 a.m. Roger falls for it and doesn’t make a fuss because it’s in his best interest to promote levity. Would Roger have bothered to wake that early for a client ten years ago? I don’t think so, what about you?

Lane finds a wallet full of cash and a photo of the owner’s girlfriend. He begins to fantasize about the girlfriend “Dolores” and even has a flirtatious phone call with her. Damn, he must be desperate? Lane invites Delores to retrieve the wallet at his office, but the owner himself shows up instead and insists he accept a cash reward for it. Lane isn’t impressed with the cash, he is more impressed with the photo that he kept.

The “not so serious” ad brings the civil rights movement to the firm’s door. A few dozen job applicants crowd the lobby and none of the bosses have a practical solution for dealing with it, except of course for Lane, who starts collecting resumes for a secretary opening.

The first episode of any new season is exciting because fans are reunited with the characters, did you find it was a good opening for season 5? Sound off you comments below.