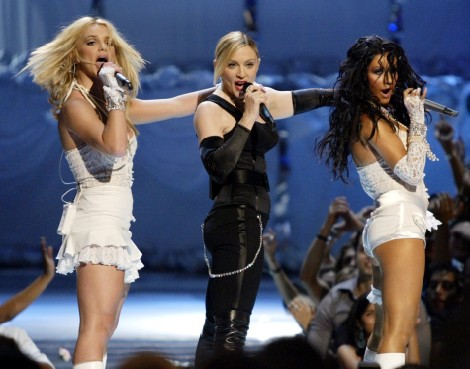 Almost a decade since Madonna shocked her fans by kissing and essentially anointing fellow pop princesses Britney Spears and Christina Aguilera at the MTV Video Music Awards in 2003, she’s ready to go for another round. The smell of desperation is in the air. Or should I say how the mighty have fallen? There are plenty of cliches perfect for this event but let’s get the facts down first. The Hollywood Reporter writes:

Nine years after that kiss seen ’round the world, Madonna could very well be gathering the former Mickey Mouse Club co-stars together for a reunion of sorts. According to the Twitter feed for the singer’s latest album, MDMA, Aguilera will appear at Madonna’s concerts in Los Angeles on Oct. 10 and 11 for a “special performance,” while Spears will “attend” the show on the 10th.

Reps for Madonna and Spears did not immediately comment on what Spears’ appearance might entail, and whether she’d jump on stage with Aguilera.

Madonna’s tour has been a hot mess of epic proportions. It seems she can’t rely on her music anymore and has succumbed to shocking the world for exposure. She pointed an AK-47 at her dancers in Israel, showcased a picture of French far-right politician Marine Le Pen with a swastika on her forehead, and flashed a boob in Istanbul. Apparently that wasn’t enough because now she wants to relive her glory days and lock lips with has-beens.

Oh, ouch. Should I call Britney and Christina has-beens? Perhaps that’s not the nicest description but let’s face it, instead of battling it out on the charts like they should be doing, they’re battling it out for ratings on lame ass reality singing shows as judges. I’m sorry, say what you want about how American Idol resurrected Jennifer Lopez’s career, but reality show hosting is the kiss of death and should be left to the Howie Mandels and Paula Abduls.

Having said all that, this is probably a masterful idea for all three woman. Madonna could use a little exposure that leaves the politics at bay and Britney and Christina need people to remember that they actually used to be performers who drew massive crowds. If they kiss again, Madonna will get the shock value she wants but will only p-ss off right-wing Americans which is how it should be.

I don’t doubt Christina will join her on stage. I’ve said it before and I’ll say it again – that girl can actually sing and wasting her time on the crap factor sparring half-wits with mega douche Adam Levine annoys me to know end. But you don’t actually think Britney will take the stage, do you? Although… Madonna lip syncs in concerts, right? If that’s the case then maybe Britney will join in but I can’t see her mastering a routine. She just doesn’t have it anymore, and unlike the other two, seems to be OK with that fact. However, if she managed to stomp her feet and shake her ass a little bit, it will be good for business. The X Factor will get some promotion along with The Voice and Madonna will remind people her tour is going on although I still don’t think most will care. It’s a toss up for me to judge who benefits the most but I’d have to say Madonna. Madonna wouldn’t share the stage with anyone unless she thought she would come out on top in some way.

But as much as I b-tch, I’m all for this! The 17-year-old inside me squealed with joy when I heard. I don’t care the reason the ladies are hooking up. It won’t be as great as the first time around but something will happen that will get us talking the next morning which is all Madonna really wants anyway. If Britney can follow along Madonna wins. If Britney falls flat on her ass and Christina can’t hit a note to save her life, she wins. Personally, I think she just wants to show the world she still looks better in her leotard than they do, because with Madonna, it always comes back to vanity.

What do you think of this little reunion? It is a sign of desperation from Madonna to recreate a moment when the Material Girl has always identified herself as being an innovator? Why do you believe Christina and Britney are game?