Maria Shriver And Arnold Schwarzenegger Back On? She’s Wearing Her Wedding Band Again 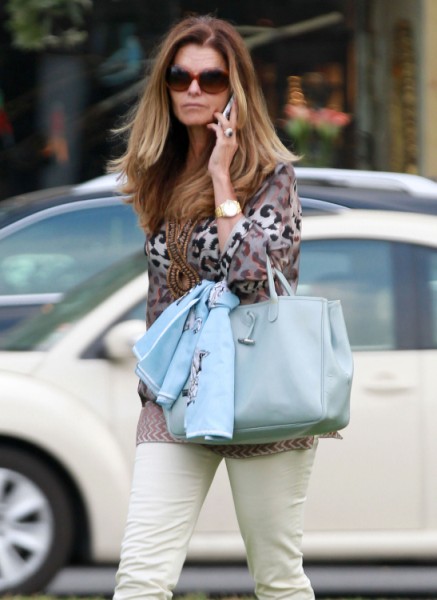 Just days after Arnold Schwarzenegger told Piers Morgan that he still loved estranged wife, Maria Shriver, she was spotted about town wearing her wedding ring. Say it ain’t so Maria. Have you taken Arnie back? The couple announced their separation in July of last year after Maria found out Arnold knocked up the maid and was paying her hush money to keep her and his illegitimate son quiet. But maybe embarrassing her all over again by dragging up his indiscretions while promoting his new autobiography is exactly what Maria needed to see that this one was truly a keeper.

I refuse to buy it! Celebuzz has the pics of Maria out with her daughter, Katherine, in Brentwood on Saturday. But is that her wedding ring? She’s been wearing that for awhile now. It’s the same ring she’s wearing in the pic I posted above and that pic was taken earlier in the summer. So why is this a story? It must be a story because Caroline Kennedy hasn’t visited and slapped the sh-t out of Maria yet. That needs to happen. I know Maria’s catholic and uber religious but enough’s enough. She needs to take that ring off and move on. It’s not like her kids are babies anymore. They’re practically all grown and know their father has some nasty habits.

But what is it about this guy? I’m not going to lie. He interests the hell out of me. Maybe it’s because I can still quote Kindergarten Cop whenever the mood strikes but I know the dude is bad news but I can’t hate him. I might even respect him. I watched the 60 Minutes segment and I was transfixed by how unapologetic and confident he is. You have to respect someone who has done what he has (came from nothing to become Gov. of California – not knocked up the housekeeper). Is that why Maria can’t let go? He’s a charmer that’s for damn sure and has the uncanny ability to get into people’s heads. There’s a scene in Pumping Iron where he sits down next to Lou Ferrigno and just mind f-cks him into believing he can’t beat him in the Mr. Universe competition. It’s truly art and a must see. If you wonder why Maria is even contemplating taking him back then watch that scene. He probably just sat down with her for breakfast and told her she wanted him back. It was that easy.

That’s why she needs to stay away! Don’t let him charm you with his condescending chuckle and family man values. In the 60 Minutes interview he basically said he was a serial cheater. Why take that back?

Do you believe Maria’s sporting her wedding ring still because she’s afraid to move on? By wearing it, are Maria Shriver and Arnold Schwarzenegger back together? How can she be so forgiving? If I was Taylor Swift I’d be pissed.