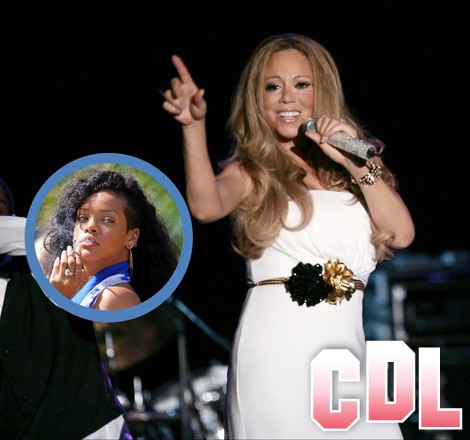 Rihanna’s current partying and reported reconciliation with Chris Brown has not gone unnoticed by everyone’s new favorite American Idol judge, Mariah Carey. In fact, Mariah is so upset over Rihanna’s recent antics that she’s considering taking the Rude Boy singer into her home. And, if all else fails, nothing says friendship like a good ‘ole fashioned intervention. Star magazine reports (via Rhymes with Snitch):

“Mariah Carey was upset by rumors that Rihanna was reconnecting with Chris Brown.” Mariah, 43, had a horrible marriage to record exec Tommy Mottola and later endured a public breakdown. “She sees a lot of herself in Rihanna and wants to protect her,” the insider says. Mariah has been trying to convince Rihanna, 24, to chill out on the partying, going so far as to suggest RiRi move in with her and that they do a few songs together. “Rihanna says she’s thankful for the concern,” says the source. “But it’s going to take a lot more to tame her!”

Rihanna will have to hit rock bottom before she agrees to a lifestyle change and that’s just more of a critique on her age than her personality. At 24 you don’t want to hear any of the nonsense Mariah’s spouting off. Because isn’t it just like a person who’s settled with babies to go around telling everyone their business? Having said that, if anyone knows about public breakdowns it’s Mariah Carey. It wouldn’t kill Rihanna to heed her advice.

I have no idea if this story is true. It’s Star, so it’s highly debatable, but I’m just glad there’s finally a story out about a celebrity not getting on board with the Chris Brown, Rihanna reconciliation. Why is it OK all of a sudden to be down with that just because Rihanna’s estranged father and Jay-Z have reportedly given their blessings? Ef that noise! Would you let your sister go back to a dude who bashed her face in? No, you wouldn’t, even if she pleaded and cried that he had miraculously rehabilitated himself. I’m not saying it can’t happen. I’m saying for a guy like Chris who is still young and spoiled and prone to bar brawls, it probably hasn’t.

So finally we have a story of another celebrity telling Rihanna she’s a dumb ass and needs to check herself. Good, keep ’em coming. I don’t care if Mariah doesn’t even know who Rihanna and Chris are (and at different stages of mental lucidity I’m sure she doesn’t). But we as Rihanna’s fans can’t get complacent and allow ourselves to fall for this young love Round 2 nonsense they’re trying to spin. I don’t care how much Rihanna cries on Oprah’s couch about losing her best friend. Your best friend was a controlling, jealous assh-le! Mariah was married to Tommy Mottola. She can spot one a mile away! So listen to Mariah. Go live with her for awhile. Play with ‘dem babues in her bedazzled, butterfly-inspired mansion. I can’t get an image of a Tim Burton movie out of my head. Mariah’s house would have that odd, carnival, third-dimension feel only with more pink. It would be an adventure, maybe not that calming with the babies screaming and Mariah having her diva moments, but an adventure nevertheless!