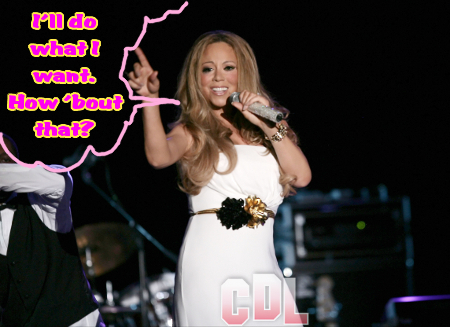 Bow chicka wow wow! News broke that Nicki Minaj is the next top candidate for a judging position on American Idol. What happened in Mariah Carey’s unicorn filled, castrato world is a whole different story, because the moment Mariah was informed that Nicki Minaj was holding the pen over the contract, she hung up the phone and did a falsetto of Leona Lewis proportions.

Sources tell TMZ that Mariah was duped into believing she would be the only woman on the judging panel. She has, after all, one of the biggest egos since Napoleon, so it must have felt like a unicorn kicked her in the face when she learned that the 29-year-old Minaj was going to join the panel. Mariah hasn’t been at the top of her career the past few years, where Minaj has taken over the world quicker than Justin Bieber selling his soul to Bacchus, so our guess is that Mariah became super ticked off when she learned that she might be overshadowed by a younger and better personality.

No-one is one hundred percent certain how the rest of the judging panel will play out, but two scenarios have been mentioned. In the first, Randy Jackson returns to the judging panel and continues to annoy us with verbose theatrics. In the second, the producers choose a different route and get a 4th male judge, alongside Randy, Nicki and Mariah, because two women and a man on a judging panel would spell disaster for the already dwindling viewership figures.

Brad Paisley, Keith Urban and Enrique Iglesias have all been touted as the fourth male judge, if the second scenario were to play out. This judging shake-up would be one of the biggest decisions in the history of American Idol and there are rumours that Middle America is bouncing off their couches due to all three judges being African American, even though Mariah is bi-racial. This wouldn’t be a problem for producing television folk, but American Idol has always had a way to cross all racial, gender and orientation boundaries, so this racial outcry would be the first since Jennifer Hudson was booted off her season and bitches cried racism.

We think Mariah needs to shut her mouth and be happy for the platform (and massive salary) she will be given. Dude, look at what it did to Steven Tyler and Jennifer Lopez’s careers, so before you bitch about Minaj, think about the benefits you will be reaping. We’re hoping Enrique Iglesias will join the star-studded panel, because nothing spells doom like a singer who thinks he can sing.

Let us know your comments in the thoughts below and whether you agree with the current judging panel and as always, stick to Celeb Dirty Laundry for the latest breaking American Idol news.