Marilyn Manson Proposes To Seraphim Ward After Only 5 Weeks 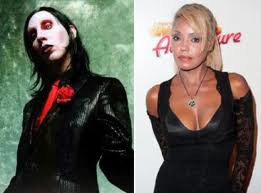 Marilyn Manson must be taking lessons from Kim Kardashian as the shock-rocker has proposed to his girlfriend of 5 weeks, Seraphim Ward.  The 43-year-old Marilyn presented actress and filmmaker Seraphim, 27, with a family ring thought to have belonged to his grandmother, last Thursday according to friends.

A source told Life & Style magazine: “Marilyn proposed with a family ring. I think it was his grandmother’s. It’s Celtic, and Seraphim says it has a magical bonding to the receiver.”

Seraphim’s representative added: “Seraphim is in a committed relationship and is over the moon about what her bright future holds with her partner.”

Sunday the actress tweeted a picture of a diamond encrusted Claddagh ring – a traditional Irish ring given as a token of friendship, love, or marriage – with the caption “OMG!“

Seraphim added: “I am still speechless and in shock!”

On her Twitter page Seraphim describes herself as “a Independent Occult Filmmaker and a Industrial Goth Rock Artist” and her pals say she and Marilyn bonded over their shared interest in the supernatural.   That and a couple of other joint interests no doubt.

Her friend added: “They share an interest in the occult and have bonded fast. He’s gotten her a house in the Hollywood Hills.”

Marilyn was previously married to Dita Von Teese and engaged to both Rose McGowan and Evan Rachel Wood.  Marilyn was recently was hired to perform at the birthday party of Johnny Depp’s son, believe it or not!  John “Jack” Christopher Depp III is the son of Johnny and Vanessa Paradis – and if the kid turns out to be a bit weird we can always blame the birthday party.

How much will it cost Marilyn to get Seraphim to marry him?  What do you think?  Let us know in the comments below.