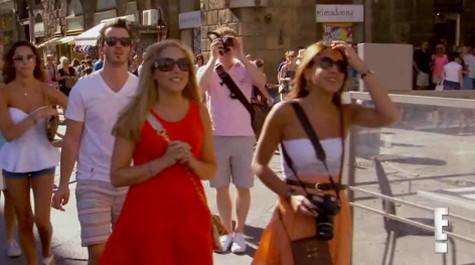 Tonight on E! is an all new episode of Married to Jonas. On tonight’s show called is called “Italy With The In-Laws.” Tonight’s show is the first part of a two part episode where the family vacation to Italy could be spoiled by an unexpected phone call and a surprising secret. If you missed last week’s we have a full and detailed recap here!

On last week’s episode Dani and her family started to ease into Kevin’s rock n’ roll lifestyle, but things were about to get rough. Kevin wanted to go camping for the longest time so he convinced the family to agree to try it. Kevin even went out and bought the girls a toilet, much to the shock and horror of the ladies.

On tonight’s show the Jonas’ are taking a first class trip of a lifetime, but Kevin and Dani are bringing along some baggage. But it’s Kevin’s mysterious phone call that could throw this trip into turmoil. They are in Florence and Kevin and Danielle are happy, Kevin points out the Duomo and she is amazed. Dani’s sister remarks, “They certainly don’t have this is New Jersey.”  Meanwhile Dani’s father has wondered off he is not so impressed by the scenery, after all he can see it all in a book.  However, he is impressed by the Gelato and heads out to get some of it.  Actually three gelatos and he has no intention of stopping.

Tonight is going to be a great episode that you won’t want to miss, so be sure to tune in for our live coverage of E!’s “Married to Jonas” tonight at 10PM EST! Meanwhile, while you wait for our recap hit the comments and let us know what you think of season 1 of “Married to Jonas”, so far! Check out a sneak peek of tonight’s episode below!

Tonight’s episode: Kevin’s mother-in-law has a crippling fear of flying but she is going to do her best to join the family on their trip to Italy. Kevin really wants to relax during this trip and he’s promised Dani that he is not going to be on his phone.

Dina is really excited about the trip, so is Katie, Mikey and Bucky. Angela is not that excited but she makes it to the plane and they all land in Italy.

The family arrives at the Four Seasons hotel and everyone is amazed at Dani and Kevin’s room, Dina says there is more marble in it than Home Depot.

At dinner, the family is enjoying dinner together and can’t believe that Angela is actually there. At dinner Dina notices that something is wrong with Dani. Since her accident, Dani has felt more anxiety and now all she wants to do is roll up into a ball and go home.

The next day, Dani confides in Kevin that it has just been a lot lately and she thinks that everything is too much for her. She goes on to tell him that she called her doctor and she’s back on some of her medicine, which means that they have to put their baby plans on hold because she doesn’t want to be on meds and pregnant. Kevin feels like she is blaming him for things because she tells him that she is doing a lot for him. Dani says that her heart is broken, she wanted something for her and Kevin.

The family heads out to the city to do some site seeing, Bucky only has his eyes set on gelato and after having over six of them, the family stops counting. At the Trevi Fountain, Kevin and Dani make a wish.

Dina is not liking the mass of people that are following them through the streets and now understands how Dani feels when she is out with Kevin.

At lunch, Kevin gets a call and picks up the phone, Dani doesn’t look impressed that he broke his promise.

Alone with Dani, Kevin tells her that he doesn’t know what to do, then he asks her if she would be upset if he left.