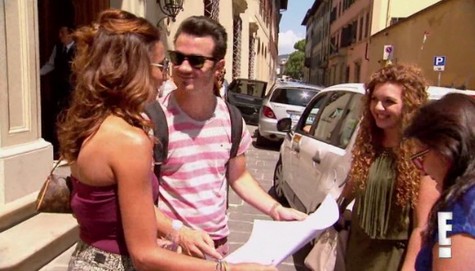 Tonight on E! is an all new episode of MARRIED TO JONAS. On tonight’s show called is called “Italy With The In-Laws, Part 2.” Tonight’s show is the conclusion of a part-two show. Unexpected business takes Kevin away from Italy, and leaves Dani on her own to handle questions about her health from Dina.. If you missed last week’s we have a full and detailed recap here!

On last week’s episode the Jonas’ were taking a first class trip of a lifetime, but Kevin and Dani were bringing along some baggage. It’s Kevin’s mysterious phone call that threw the trip into turmoil. They were in Florence and Kevin and Danielle were happy, Kevin pointed out the Duomo and Dani is amazed. Dani’s sister remarked, “They certainly don’t have this is New Jersey.” Meanwhile Dani’s father wondered off, he was not so impressed by the scenery, after all he said he can see it all in a book. However, he was impressed by the Gelato and headed out to get some of it. Actually three gelatos and he had no intention of stopping.

On tonight’s show even half way across the world Kevin gets bombarded by crazed fans! See how his Italian groupies behave when he exits his hotel.  Kevin sees the girls waiting and he nicely asks them if they want a picture.  They post with the group and they give Kevin a caricature of him and Dani.  Dani like the present but really hopes they do not look like the picture.  One of the fans starts to cry as Kevin pulls away in the car and Kevin tells her she is suppose to be happy., not sad

Meanwhile when Dani’s father gets into the elevator, the elevator starts ringing for overweight, Dani’s brother tells him he is the equivalent of three people.  He asks him how much gelato and tells him to walk the stairs.

Tonight is going to be a great episode that you won’t want to miss, so be sure to tune in for our live coverage of E!’s “Married to Jonas” episode 9 tonight at 10PM EST! Meanwhile, while you wait for our recap hit the comments and let us know what you think of season 1 of “Married to Jonas”, so far! Check out a sneak peek of tonight’s episode below!

Tonight’s episode: Kevin wants to know if Dani is going to be upset if he leaves and although she is, she tells him that she is not. Kevin starts packing and when Dani sees him with his suit case, she asks him if he’s leaving and he says yes. Kevin tells her that opportunities come up randomly and he’s sorry. Kevin is worried that in Dani’s fragile state lately will push her over the edge. Kevin looks at Dani and tells her that he is making the choice, he is choosing her and he is not going after all.

Kevin tells the rest of the family that he is not going and everyone is thrilled. The family leaves the hotel for more sightseeing, Kevin and Dani come out of the hotel and see some fans who give them a gift and take pictures.

The family arrives at a winery in Florence and gets a tour of the winery as well as a lesson in stomping on grapes. Dani felt it was slightly gross, but she joined in with Kevin anyway.

Everyone joins in on some fun pizza making, then they sit down for dinner to enjoy the pizza and wine.

Dani takes a walk with Dina who tells her that anxiety is a real thing and the whole family has been talking behind closed doors about what to do with her. Dani is surprised, but Dina tells her that they are concerned that she is trying to make everyone else happy but she is not happy. Dina is really worried about her sister and doesn’t want to see her like this anymore. She goes on to tell Dani that she needs to set time aside to spend with Kevin, they need to be normal. Dina thinks they need to push through, marriage is tough and they have to find a way.

Dani thinks the problem is that she really has no role model that is married to a celebrity which is different from a regular marriage.

It is the final day in Italy, the family is at Porto Venere and find a quaint place to have lunch with a good view of handsome boys for Katie. Meanwhile, Michael is enjoying girl watching.

Dani and Kevin are walking through the charming streets of Florence when she tells him that his schedule drives her crazy and she just wants them to go back to where they used to be. Kevin agrees with Dani and they seem to come to a truce.