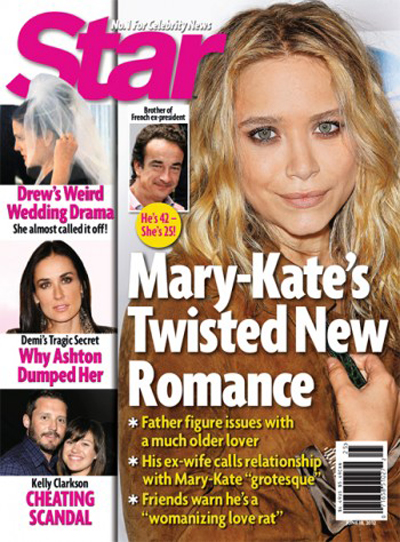 After many years as a blonde, Mary-Kate Olsen recently debuted a new brunette look at the CDFA Awards in New York, but apparently her hair color is not the only dark thing in her life right now!

The latest issue of Star Magazine alleges that the 25-year-old fashion designer’s new romance with Olivier Sarkozy, the brother of the French ex-president, is not all rainbows and butterflies. Reportedly, friends have warned Mary-Kate that Olivier is a “womanizing love rat.”

The magazine also makes much of the couple’s 17-year age difference, claiming that the reason Mary-Kate is dating an older man is because she has “father figure issues.” (However, there’s also the possibility that twenty-something guys just don’t cut it when you’ve been famous all of your life and have a multi-million dollar fashion empire to run.)

Adding more fuel to the scandalous fire is the fact that Olivier, who works as an asset manger,  was previously married, and his ex-wife, whom he separated from in 2010, is now publicly calling his relationship with Mary-Kate “grotesque.” Read More: Mary-Kate And Ashley Olsen Involved In Sex Trafficking Scandal And Arrest

To find out more about Mary-Kate’s twisted new romance– pick up the current issue of Star Magazine for all the details!