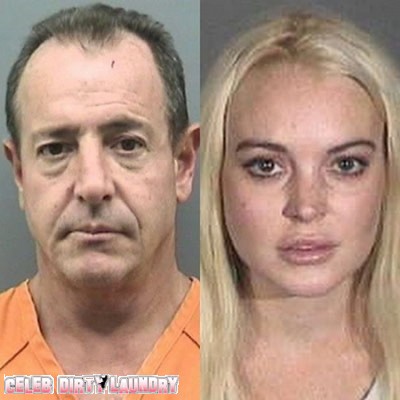 Roses are red, Michael Lohan is blue, he doesn’t want his daughter dead but she says “I Hate You”! Michael’s latest attempt to help his troubled daughter Lindsay Lohan has backfired. He showed up at her house with an army hoping to get her into rehab, but was rewarded with a phone call to the police.

Michael has defended Lindsay since her troubles began. A recovering addict and alcoholic, Michael never wanted to see his daughter self destruct. The problem is he can be a contradiction. From Celeb Dirty Laundry Michael says of Lindsay she’s working hard to stay clean. When asked if he was going to take a prominent role in the process, he said that he probably won’t get too involved. “On a personal level as a father — and I’ll always be a father first — I don’t think it’s for me to be involved with that aspect of her life. I’m not involved with any of her ‘business.’ Her mother, Dina, is her manager so I leave all that up to them.” He does, however, extend a full amount of support as she makes her way through the process.

I don’t think Michael remembered he even said these words. He has put himself in middle of many of her fights. It could be because Michael is a caring father, or at least he learned he had to do it as part of his recovery. But it’s more likely that Michael wanted to keep his name out there. It’s hard to take Michael seriously he is in the news as much as Lindsay. A recent headline was that Michael knocked up his on again off again girlfriend Kate Major. How can you respect a father who is still involved with a woman he abused and claims abused him, who took out multiple restraining orders against him. And how do you respect a man who is often lampooned in the media.

Chelsea Handler did a skit about Michael trying to help Lindsay and being thrown out. He big balls were caught in the door as the door was shutting. I think that about sums up the size of Michael’s ego and what the public thinks of him. Michael needs to go back to Celebrity Rehab and take his ex-wife Dina Lohan with him. Once these two nut jobs get healthy they can help Lindsay get back on the road to a come back.