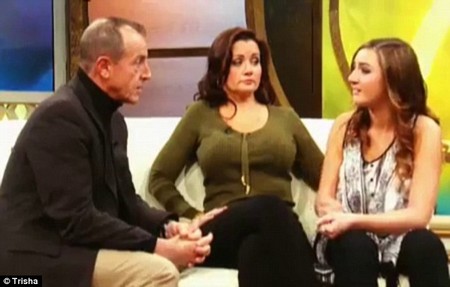 The Lohan family should be cast in a Jerry Springer reality television show, because according to latest breaking reports, Michael Lohan fathered an illegitimate child in 1995. Michael took part in an episode of “The Trisha Goddard Show”, a trash television tabloid show in the vein of Ricki Lake and Jerry Springer. On this episode, he agreed to submit to a DNA test. Unfortunately, Lohan should have thought twice about submitting to such a test, because soon after that, he came face-to-face with the 17-year-old daughter who claimed to be his daughter. Shockingly, not so shockingly, the tests came back positive. Oh.My.Lawdy!

The cringe worthy Lohan allegedly fathered the 17-year-old Ashley Horn between the births of Ali Lohan (1993) and Cody Lohan (1996). The heartbroken Ashley’s mother, Kristi Horn, claimed for years that Michael was the father, and even attempted to get him to pay child support, but in true Michael Lohan fashion, he vehemently denied all of these allegations. The episode, airing tonight on NBC, had Kirsti Horn in tears, had Ashley Horn denying Lohan’s feeble attempt at a hug, and had Kirsti verbally attacking Lohan for refusing to acknowledge her in the past. Ashley also refused any affiliation with the Lohans and said, “I don’t want to be part of the Lohan trainwreck.”

This take on modern parenting might have a reverberating impact on the already strained relationship Michael Lohan has with the rest of the family, most importantly Lindsay Lohan. The two haven’t been on speaking terms since Lohan staged an intervention on Lindsay last month, and also attempted to have her taken to rehab. Lohan is also expecting his umpteenth child with his 29-year-old girlfriend Kate Major, but the lasting effects of this exploitative television show might bring a sudden and abrupt end to that relationship.

What do you think about Michael Lohan’s latest scandal? Is it just too much? Should he be held responsible? Let us know your thoughts in the comments below.